A woman's outfit with a gardecorps from c. 1300 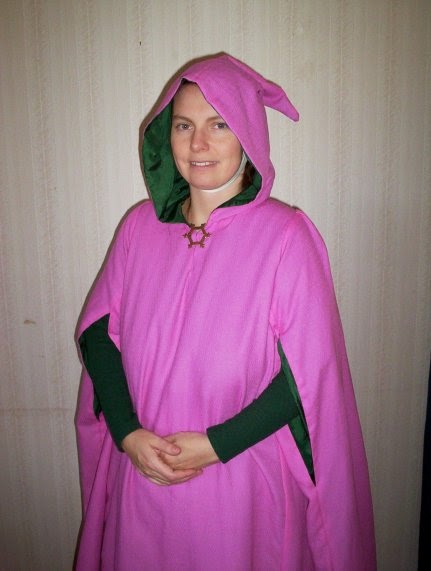 The main inspiration for this outfit is this illumination from the Grosse Heidelberger Liederhandschrift, aka the Codex Manesse, a german manuscript from the early 14th century. There are however many more examples of this type of garment, already from the 13th century, such as this picture of queen Emma, from a mid 13th c. manuscript, the vita of Edward the Confessor. 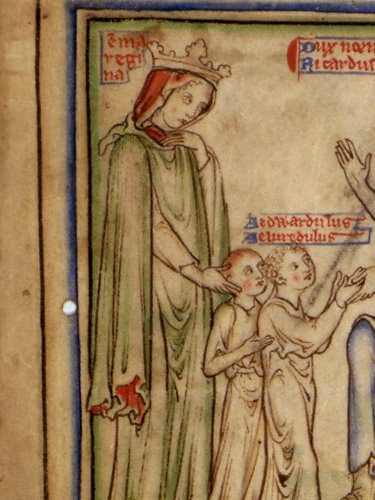 The name gardecorps is French and among and there is a difference of opinion between scholars as to how it looked. Some describe at loose and flowing with short or no sleeves, while others claims that the garment's most characteristic trait is the wide, long sleeves hanging loose from the shoulders. This garment also usually had a hood. There is also one scholar that claims that it was a tight, jacket-like garment, which is unlikely considering when the garment was in use, mainly the 13th and the 14th century.

There are two articles in Waffen und Kostümkunde that deals with gardecorps, among other things. One is "Die Höfische Tracht der Isle de France" by Lore Ritgen from 1962 and the other is "Ulrich von Liechtenstein - seine Erkleidung für die Venusfahrt" by Annemarie Bönsch from 1998. In both these diagrams/patterns of this garment are given. In the first article the gardecorps is constructed with pleated sleeves set in very deep sleeve holes. They have a slit in front of the sleeves to let the arms out. This construction is supported by a picture of a figure from the tympanon of the middle west portal of the cathedral in Strasbourg where you see the deep sleeve holes on the back of the gardecorps and regular, narrow pleats that continue over the shoulder and then widens slightly . This is a rare example where you actually get to see the backside of piece of clothing. One should however be careful even with this wonderful evidence since the very straight, narrow and structures pleats that reaches below the shoulders on this statue may by stylization of more loose and unstructured pleats. The pictures in Codex Manesse doesn't look like the sleeveheads are pleated that way. One also wonders where that extra width disappears when teh pleating ends. If the fabric behaved normally itshould widen a lot were the pleating ends. In the Ulrich von Liechtenstein article it is not obvious how the sleeves are attached but the gardecorps seems to be constructed as a sleeveless surcoat with hanging sleeves that only are rectangles of fabric. These are gathered and attached to the shoulders of the "surcoat". Their reconstruction doesn't look right on the photos they have taken of the costume and I think there are enough medieval pictures that show the sleeves as real sleeves, set in a sleeve hole. For example the pictures of queen Emma shown above.

One word that may have been used for this type of garment is Ärmkappa, which means "sleeved cloak". the Latin word toga was used interchangeably with ärmkappa too. This is one of the funny examples when latin words are used in a totally different way in the middle ages than in classic Latin. Ärmkappa is mentioned 21 times between 1328 and 1374, 14 of them are intended for men and 6 for women (the last one is donated to the church, but it belonged to a woman). Two of the women that are given this garment are given the male donor's own ärmkappa. So it seems to be mainly a male garment, but one that could be worn also by women. In one will, from 1371, it is stated that "herr Tore shall have the double (lined) ärmkappa with a hood in the same colour", which shows that it had a loose hood and not an attached. Otherwise a hood is only mentioned once.

Most of the ärmkappor lacks information about colour, but there are four blue, one red, one green, one black and one brown. Many of them are said to be lined; one in vair, two with marten, one with green lining, one with a patterned lining and two are just said to be lined. The main material is mentioned once: black or dark scarlet. Although it is note sure that ärmkappa is what we see on the pictures from the Manesse Codex and other places, it is a plausible explanation. The documents show that the garment was worn by both sexes, that blue was the most common colour and that fur lining was the most common lining. However, fabric was also used as lining.

The gardecorps was however the top layer, there were other garments worn before it was put on:
First there's a simple linen shift made with rectangular construction, a straight piece for the body with triangular gores at the side and sleeves made from straight pieces. The odd vertical seams that can be seen over the bust are nursing slits that I have sewn shut now, when I stopped nursing. With this I'm wearing sewn over-knee hose made from red wool and held up with garters at the knee.

Then I have a green wool cotte a simple linen chinband and a fillet with a wavy edge. The belt is a hand woven ribbon, but one could also use a leather belt. If I had things I wanted to carry with me, like a purse or a small knife they would be hung from this belt and they could be reached through small slits in the side seams of the gardecorps, called fichets. By this time I have also put on shoes.

And then it's time for the gardecorps. Both the cotte and the gardecorps are constructed from a pattern taken from the gown of st. Clare of Assisi, which is dated to c. 1250.

A common idea about the middle ages is that married women never showed their hair. That is not true, married women always wore some kind of headwear, but how it looked and how much it covered varied between times and places. The way I'm wearing my hair in these picture is perfectly fitting for a married woman in Germany c. 1300, but to wear it loose without the chinband a fillet or/and a veil would probably not have been proper. If one wants to cover the hair more a veil could always be draped on top of the fillet. More ways of having your hair and headwear from the early 14th c. can be found on picture of my other 14th c. outfits. For the 13th c. it seems to be most common to wear one's hair in a bun with or without a hairnet and then a chinband or wimple and the fillet.
Emma, however, wears a veil and vimple with her gardecorps in the image above, and here is another of her, wearing her hood up. 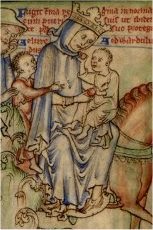