I am a very entusiastic medieval camper, and I want everyting in my tent to look - if not perfectly medieval, then at least, not modern.Fur lined bedspreads were popular in teh Middle Ages, I found quite a lot of them in Swedish wills when I did the research for my PhD. So of course I had to make one. That was maybe 20 years ago, but it's still going strong. It's made from fulled wool, and lined with faux fur, and it features the heraldic devices of me and my husband.

Here modeled on our bed at home. 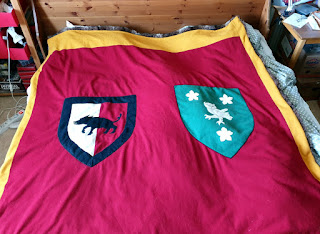 And in the tent. 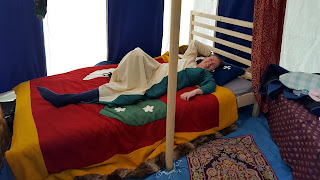 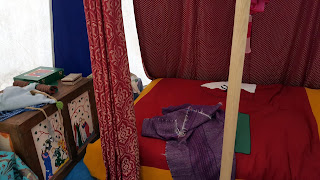 However, this year hubby isn't coming with me to Double Wars, and I might not even be able to get my tent down there. If I can't brign ti I will share a tent with at least one other person, so I am now working on ways to create a little space of my own.
I have plenty of curtains, as can be seen, and I will hopefully bring one of my chests. But I won't bring my 120 cm wide bed. Instead I will have a narrow modern camp bed (you can see it in the photo where I'm lying on the bed) and a horsehair mattress. And then the red and yellow bedspread will definitely be too big.
By chance I had just been gifted some fulled wool from my sister, which was too little for a gown, but just perfect for a bedspread.
I had lighter green wool leftovers from making a skirt and jacket to wear with my folk costume, and some white wool from a dress I made for my eldest daughter in 2015.
It was quick work actually, the owl and the flowers on the shield were sewn  mostly during an oneline swing meeting for Drachenwald. 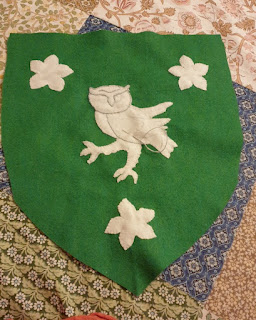 Then last Thursday, at the Barony of Gotvik's sewing meeting I embroidered the contours  of the owl with linen yarn in split stitch, sewed the shield to the darker green wool, and outlined it with a grey cord, and, finally cut out plenty of wool flowers to spread over the bedspread. 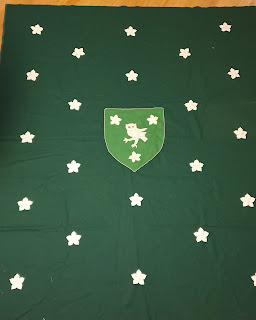 Then the next day I was off from work, since it was Good Friday, so with help from my cats I sewed all the flowers to the green wool, while enjoying the sunshine on my balcony. 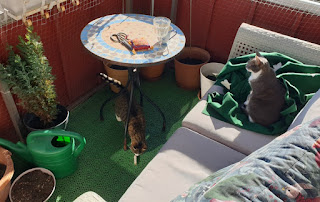 The same evening I cut the fur (more like teddybear fabric) lining, which is made from 80 % wool, so much nice than the all plastic fake fur, even if it doesn't look as pretty. It actually looks quite a lot like the woven shaggy pile known both from medeival Ireland and Iceland.
Since fake furis horrible to sew I wanted to pin the two layers together very carefully before stitching them, rightside to right side on machine. Unfortunately it was WAY too much fun to walk and jump on the green wool with fur under it, so I ended up having to shut the cats into a bedroom to be able to do the pinning. 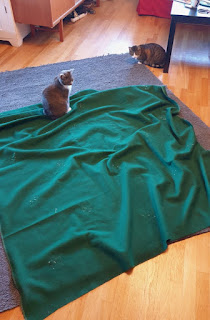 Saturday I sewed it all together, and with this fur fabric it actually wasn't hell at all, it went quite smoothly. I turned it so teh rigth sides came out and sewed the opening shut by hand - and by that time the sun had moved to the other side of the house, so I really needed it on the balcony. 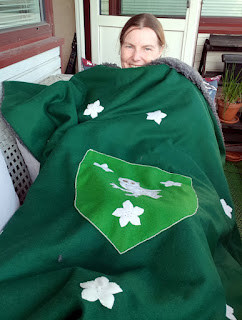 I will be so warm and comfortable at Double Wars.
Upplagd av Eva kl. 12:36