So, after much thinking, I decided just before I went to Double Wars, to ask my friend Alfhild de Foxley if she wanted to be my apprentice.

This photo is from the Barony of Gotvik's picnic today, showing us together. Like Branna Alfhild got a painted glass with my badge on it, in the same style as mine, and with her heraldic device on it.
And she also got a green belt. The leather belt was a gift from my Mistress, Mistress Helwig, upon my Laurelling, and the I bought the pewter buckle and belt end from my frist apprentice, Branna's shop, at Double Wars. This is also the first time I've fitted a buckle and belt end to leather - as they say in Swedish: You learn as long as you have students. 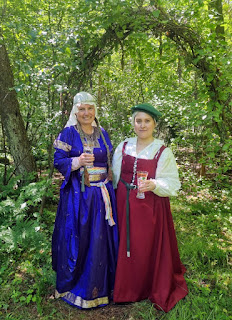 As with Branna, my first apprentice, I didn't, and still don't really know what and how much I can give to an apprentice, with my exhaustion and general bad health. But it appears that both my apprentices want the same thing: help to do more research and scholarly writing, which at least is something that I am good at.

So, overcoming my feeling of inadequacy, I have now asked two talented people, and two friends, to be my apprentices. And both of them said yes. Well, Branna asked me first, but that was years ago, and she could have changed her mind.

A Laurel-apprentice relationship can take many forms. When I was apprenticed to my Mistress Helwig it was most of all a way to bind us together closer in our friendship. I don't live close enough to her to learn tailoring skills, and research I could already do. It was a way of formalizing the closeness that we've felt since we first met, many years ago,

I think that that is one of the things  that Alfhild's and mine Laurel-apprenticeship is about too. We already do lots of projects together, including holding all A&S meetings and courses in Gotvik. We are not exactly in the same field,  though overlapping, but we support and inspire each other. And as her Mistress I give her a place in my household, a plays where she belongs, where she is home. While she lives further away I hope that I can be that for Branna too in some sense.

This photo taken by Margareta Arvidsdotter is an excellent one of me and Alfhild - always talking about different medieval and early modern material culture, and things that we want to make. 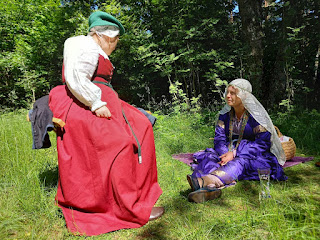