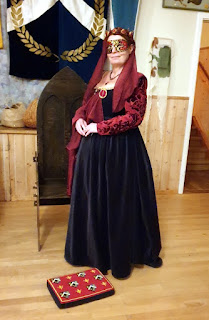 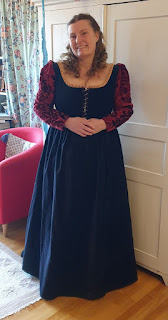 So, Gotvik had decided that our annual autumn event: Festivalo de Caderas, should include a masked ball.

I had planned to do research on masked balls in the medieval period, but I didn't have the energy this autumn. However, what little I had read about it suggested that they were more common in the renaissance. It also appeared that Allegorical figures and Roman deities were common in masked balls and in masked parades.

So, since the ball  was close to All Hallows/Samhain I decided to go for something related to the Underworld: Proserpine/Persephone, queen of Hades.

Read all about the gown, the sources, the making, and the accessories here.