Costuming and sewing year in review

Well, as we all know there weren't any costumed events after the beginning of March, except a few picnics, and online SCA events, but I did sew and make new costumes, and also plenty of clothing more for every day wear.
I am still recovering from exhaustion, and the first months of the year I mostly spent watching "Bones" or walking in the forest. Walking in the forest, and biking continued to be my favourite activites throughout the year. Since I am immunocompromised I can't go on public transport, so if I wanted to get somewhere it was on my bike or on my feet.

But, on to the costumes/clothing - there are five main categories this year:

In April I started on my first medieval costume of the year: a green wool 12th century gown with embroidered trim in silk. It is all hand sewn, and has a hand sewn undergown from linen. It was finished in the beginning of June, but then it got too warm for me to consider a photoshoot. And hubby was working so we had to count that in too. So it wasn't photographed until early July. More photos and lots of information can be found here. The belt is from Svetlonoska weaving. 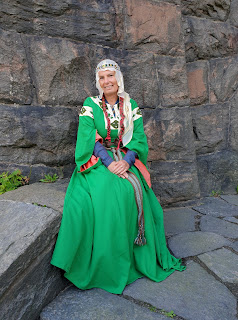 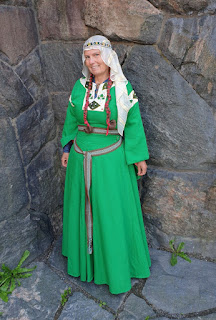 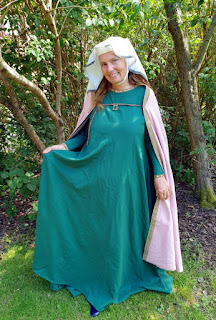 Between January and March I worked on a riding habit, mostly based on the one in Patterns of Fashion, you can read more about it here. There's even a video of me riding Casey. I really should have had a saddle, but I am just happy that I didn't fall off. 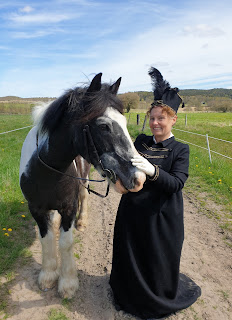 In November I hand sewed a new pair of regency stays from cotton and made a new linen shift, also by hand. 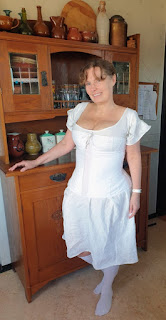 I also made a checked cotton dress, from thrifted fabric, a new cap, and a two new aprons. One from new grey cotton, one from the same thrifted curtains that I used for my late 18th century open robe. Like the rest of my Regency wardrobe everything is hand sewn.
Old caps in these three photos. 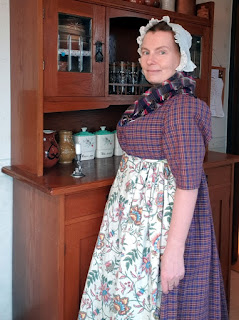 New cap, from a thrift store find of home made lace, and cotton fabric an old dress that used to belong to my best friend's daughter. 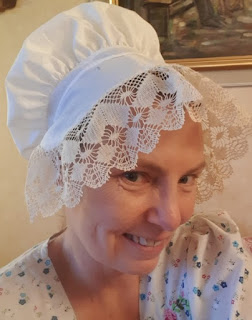 I also made a winter bonnet from an old plastic "straw" hat and some fabric remnants and thrifted trimmings. 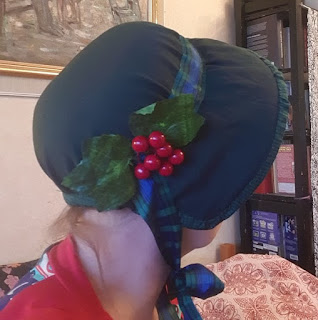 In December I made a regency ball gown from sheer cotton with a silver thread woven in, trimmed wioth silver fringe and glass beads. I am now waiting for silk to arrive so that I can make a a sleeveless petticoat for it, I can't wear the same petticoat with everything. 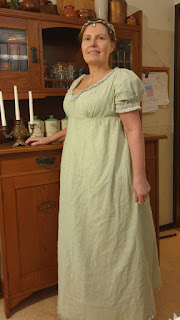 In March I made a 16th century corset, using my effigy corset pattern, and added lots of fabric leaves to it. I then dragged my husband to the forest to take some photos.
The skirt is bought. 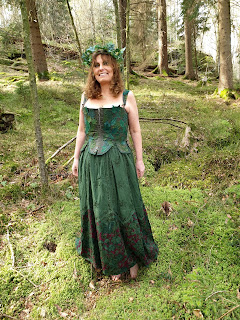 In April I put fabric leaves, made by me, on my 16th century Venetian gown and made a peasant blouse for it from a cotton scarf from a thrift store and lace which I applied and sewed beads to. 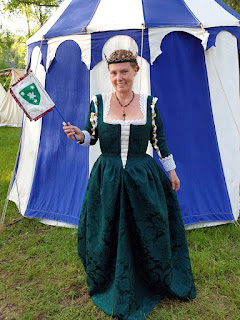 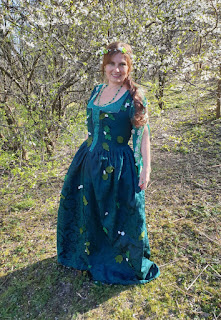 I also made a capelet all covered in leaves and some flowers.

More photos and info here.
In September I made a 1930s bias cut gown, which I used for a set of fantasy photos. I had by then started making wire crowns, and wanted to make one for each of the elements. We made a really succesful photoshoot of me as a Water Elf by lake Vänern, more photos here. 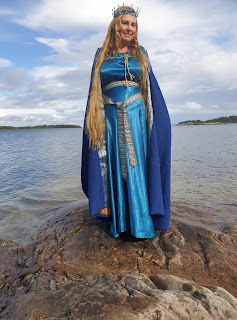 I also made a Fire Elf costume in October, from an old sunbleached saree for the undergown and two brocade table cloths that I found at a thrift store, pluts some velvet remnants. The overgown is heavily influenced by the works of Mariano Fortuny, as you probably all can see. The crown is made by me. 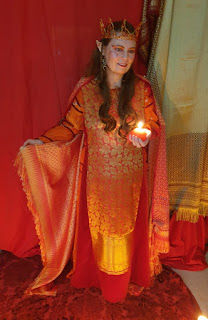 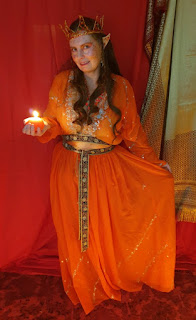 We did a photo shoot with my air crown too in October, but I am not very happy with it and I didn't make any new clothes for it. 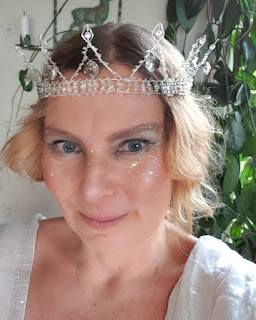 Dirndls
My dirndls, and dirndl-inspired dresses fall somewhere between costume and mundane clothing. They are neither modern, nor normal, but I do wear them for everyday wear.

I started with a green one in April, and then went sort of crazy. 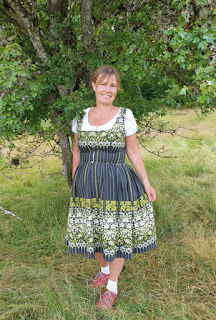 That dress quickly became my standard hiking clothing throughout late spring, summer and early autumn. It has as apron, but I don't seem to have any photos of me wearing it. 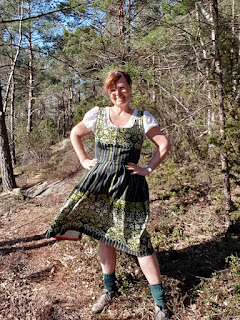 The next one was made from unused cotton fabric from a thrift store. Here I tried Froschgoscherl (info here) as trim for the first time. 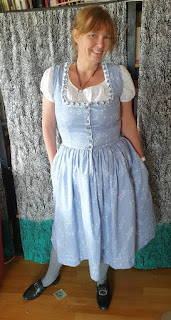 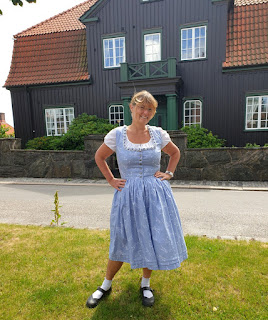 Both these are worn with a bra under, but for the next one I made the bodice supportive, with a few bones in front. Unlike the first one which was made with hook and eye tape and the second which has buttons this one is laced. It has Herzrüche around the neck, and the apron was actually made for the blue dress. It is an old sheet from a thrift store. This dress is otherwise made from new material, both cotton. 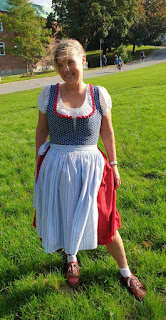 I re-made a courduroy skirt that I made last winter into a winter dirndl with a velvet bodice. Horrible photo, and I have curlers under that cap ;) 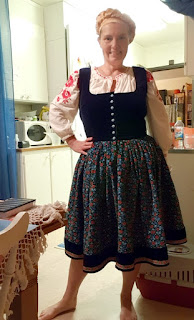 I made another more winter-y dirndl, from the same pattern as the light blue one, from a vintage cotton fabric in green with pink roses. 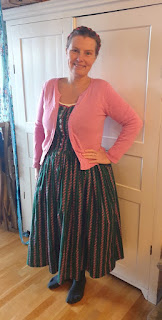 And finally, as you have seen: the christmas one, from christmas patterend quilting cotton sold at half prize in February this year. With real lacing rings, supportive with a few bones, and closed with hook and eye tape under the lacing. I wonder when I bought that hook and eye tape - it can't have been this millenium.
And it has TWO aprons, one from the old lining of my first medieval wool cloak from 1993, and one from cotton bought at another thrift store this summer. The trim is also from thrift stores, love vintage ribbons. 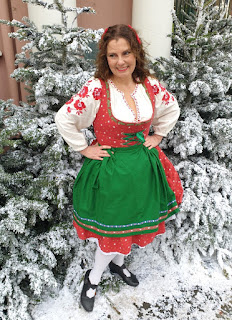 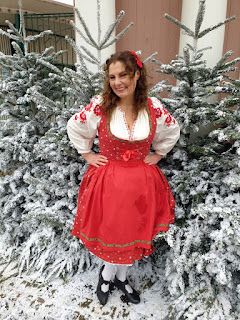 As mentioned above I made a 1930s bias cut gown from viscose satin.

But mostly I made insanely colourful dresses, and a pair of tights and a hoodie. 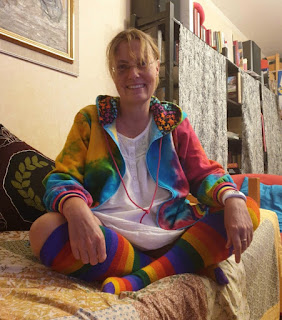 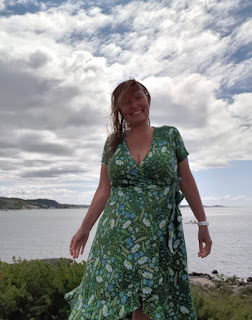 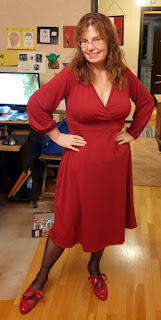 I have actually made a few more, plus a jumper for Rickard, but I don't have any photos.

My projects for next years is more Regency, a late 16th century silk damask doublet, and 13th century Spanish. Plus continue to embroider on my silk cloak.
Upplagd av Eva kl. 15:56