As you may recall I got enthusiastic about patterned 13th century clothes a month ago. One of my absolute favourites was this image: 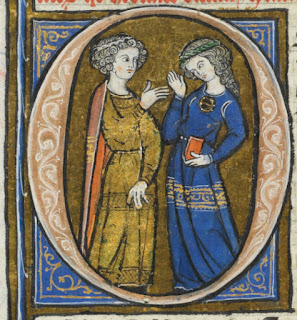 While it is likely that most of the striped garments of the 13th century had woven stripes I thought that maybe, just maybe, when there was just one stripe, or a few, but placed at uneven intervals, as on the man's tunic, they might be embroidered. Or applied from another fabric, but I'm going with the embroidery theory here ;) Since her stripe has the same background colour as the rest of the gown.

So, I have started the embrodiery. In chain stitch, which isn't typical of the period, but my split stitch doesn't produce half as nice results. 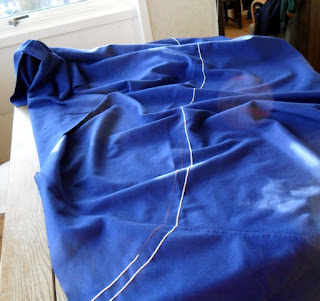 There will two double stripes like this, maybe 10-12 cm apart, and then something inside that, haven't made up my mind yet. But fleur-de-lys are always nice. Like Edward the Confessor. Whose tunic surely is made from patterned silk. 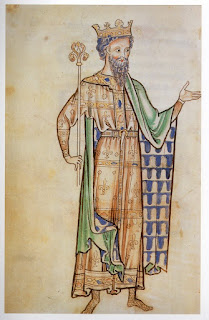 I am also justifying the embroidery with the fact that embroidery on wool was rather common for interior decoration. Imitiating the patterns of brocaded silks in a cheaper technique is at least palusible, especially since we know that brocades were imitated in other ways, such as printing. Though probably mostly for interior decaration purposes, since the paint would have made the fabric stiff. The preserved printed fabrics are either on linen or silk (or printed cottons from India, but I'm talking about European production here), I have not seen printed wool fabrics mentioned before the 18th cnetury, but I would love if anyone of you have found it somewhere earlier - it really isn't my area of expertise.

Also, since we know of embroidered bands at the hem, it wouldn't be so far fetched to make one a bit higher up.

But, as as said before, most were undoubtly woven, in the first link above you find several preserved examples, and there are also lots of documents from medieval Flanders dealing with the production of striped cloth.
Upplagd av Eva kl. 23:53 5 kommentarer:

I wanted a pink veil already when I last time got immersed in the fashions of the period 1250-1325. Here's one from the Grosse Heidelberger Liederhandschrift. 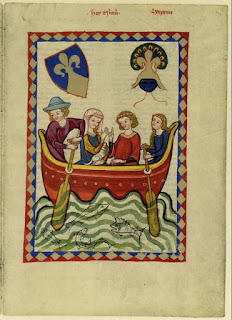 I actually thought that I had made one, but apparently not. So today I bought some pink silk, cut and started hemming; while listening to Harry Potter on audio book. And here it is. 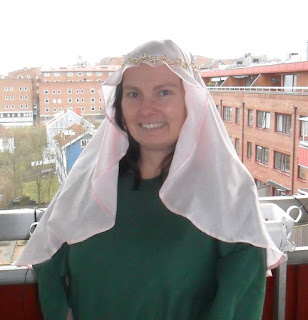 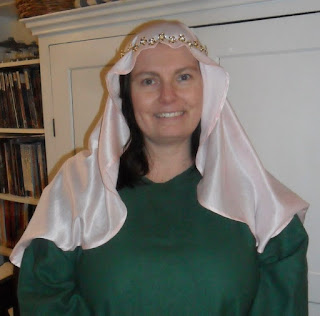 It is an oval shape, to give the nice wavy folds you see on so many images in the Grosse Heidelberger Liederhandschrift. Like this one, where you also find the same combination of veil and gold garland as I'm wearing. 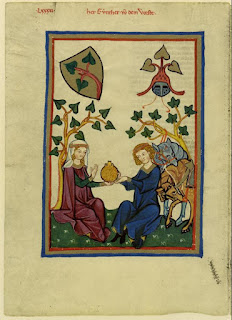 Finding fitting and jewellery for the 13th and early 14th century isn't as easy as if you're looking for later 14th, or 15th century stuff. There are two reasons for this: one is that there appear to be more finds from this period, or at least more that are dated to those periods. Also, dating tend to be just "14th century", which isn't much use if you're looking for the first 25 years of that century. The other reason is that since there are so many more re-enactors doing late 14t and 15th cnetury there is a much bigger market for it.

Frustratingly a lot of manufacturers also tend to just give the dating as "medieval", and even when they have dating it is usually not possible to do a search by century.

But then you have the web site of Armour&Castings in the Ukraine where you can search by century, and which has a lot of things from my period that I have never seen reproduced before.

Today, which was a seriously lousy day, a package from the arrived and made my day much better. It contained a buckle, some belt ornaments and this lovely brooch: 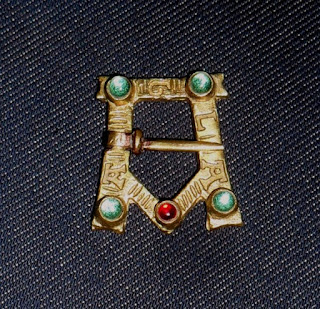 The funny thing is that I only found the original a month ago or so, here it is: Walter's Art Museum. It's from the 13th century and the letters form a prayer, namely  "AGLA: Atha Gebri Leilan Adonai" ("Thou art mighty forever, O Lord"), I am of course totally ignoring this and pretend that the A is for Aleydis, the name that I use in the Society for Creative Anachronism :)

Anyway, I found it (on Pinterest of course), and exclaimed on facebook: "I want this!" And, two weeks later I found Armour&Castings while trawling the internet, and they had it. I've never seen it anywhere else.

And today it came! So yay!

And when I have money again I am so getting this belt mount.  And lots of other stuff.
Upplagd av Eva kl. 12:52 Inga kommentarer:

So, I dragged hubby out to take some photos of me in my murrey set of clothes, so now they have their own page. 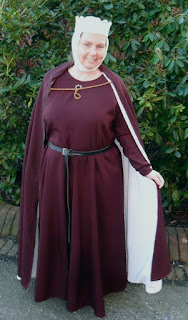 If you want to read more about matching sets of clothes, I wrote about it here and here.
Upplagd av Eva kl. 14:02 Inga kommentarer: