Since I now have a Venetian 16th century gown, and since I hope that Double Wars, where I'm going tomorrow will have at least some sunny and warm weather I decided that I needed to make myself a flag fan.

Some quick googling found this awesome page, and there I learned that only young maids and newly married youg women had white fans, while old matrons like myself had painted fans.

I really want to make a proper one, probably from parchment with cut out pattern, and embroidery, and a fancy handle, one day, but for now I made it simple, and from not very period materials:

First I wanted to copy a 16th century painting of Venus, because they apparently often had slightly risque motifs painted on them, but I didn't find one that I liked, and I was too tired from my arthirtis and infections to look around more than an hour or so. So I made a painting of Diana, and possibly not a very renaissance one, on one side, and my arms on the other side.

And it really cools wonderfully during a hot flush ;)

A 16th century Venetian gown in the making

Those who follow this blog on facebook have probably seen that I have been working on a 16th century Venetian gown. That is actually one of the very few European fashions from the period 1000-1600 that I haven't made previously, but I always knew that I would make one some day.

Anyway, I soon realized that the shifts that I already have wouldn't work with it, since it's cut rather low in the back (and the front, but that's more common). So on Monday I started on a new, hand sewn shift. it is almost finished, but I needed to see where the neckline should be, so I had to try the gown on.

It is made from a cotton damask and the main purpose of this gown is to make something pretty that I can loll around drinking bubbly in. The sleeves are detachable, for decadent lounging on blankets at Double Wars.

My main inspiration for the sleeves was this painting from the 1550s, by a follower of Veronese: 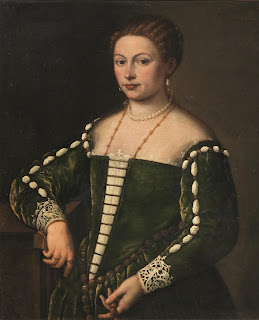 When trying it on I found that I need to reinforce the lacing (it is laced through two rows of ribbon on the inside) and that the cord that I had used for lacing had gotten mysteriously much shorter - thanks to this lovely lady: 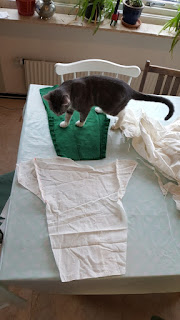 In other news I have an inflammation in my uterus (of all places) and I'm on two types of antibiotics and I feel really crappy.
Upplagd av Eva kl. 05:43 3 kommentarer:

In the latest issue of The Dragon's Tale, the Kingdom newsletter of Drachenwald I have an article about my recreation of blessed Isabelle de France’s auqueton. For those of you who are not members of either Drachenwald, or SCA in general, who can access Dragon's Tale here, I have, with the permission of the chronicler, also put it on this blog (with slightly more pictures)

You can find the full information about the garment and its creation here.
Upplagd av Eva kl. 00:23 Inga kommentarer:

Thee weeks ago I arranged a sewing meeting for my local SCA group: Gotvik. I have sewign meetings every other Thursday at my place, and has had them for over four years, but some people have trouble coming on a weekday, so we thought that a whole day of sewing would be a good idea. This time we weren't at my place, instead baroness Katarina and I brought our sewing machines to Studiefrämjandet, an educational association.

I didn't have any personal sewing projects, but we had decided to make banners for Nordmark, the SCA principality that covers Sweden, and for the Kingdom of Drachenwald (Europe, plus Israel and South Africa), so that visiting royalties wouldn't have to bring banners. Especially since some of them are flying to events from abroad we thought that this might be a good idea.

The Nordmark banner is the easier one, so I started on that. I used cotton broadcloth instad of something fancier, the focus is in sturdyness rather than on historically correct.

The leaves, made from ochre yellow cotton broadcloth were afterwards painted with textile paint in gold colour. The fringe is from my stash. 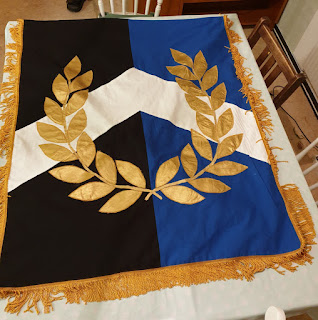