I haven't done 15th century Italian since the early '90s, if you don't count my wedding dress, which was a sort of pre-Raphaelite version of an Italian renaissance gown 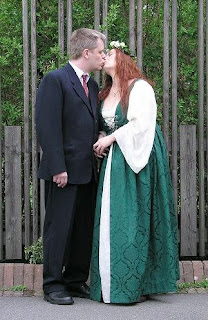 But my trip to Florence in Septmeber, for a conference with the Early Modern Dress Network really made me enthusiastic about the period and the style again. Especially since there were presentations both about a partly preserved gown from the period, which used to belong to Osanna Andreasi, also known as St. Osanna of Mantua, and about Ghirlandaio.

Adding the wonders of Santa Maria Novella I decided to have a go at it. I am also workign on using my stash of fabric, so I decided to use rayon damask cutains that I bought many years ago. I see it both as a wearable test for a later version in silk and as something nice and comfortable that I don't have to be excessively careful with at outdoors events.

In any case it will mostly be partly covered by an overgown when worn. But I haven't made that one yet. 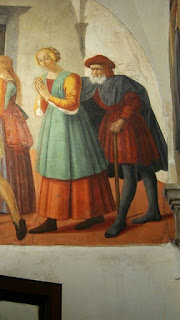 Next time I will make the sleeves much wider at the top, but I was short of fabric. Osanna's sleeves were rather wide and soemwhat puffy at the top. You do see narrow sleeves too in art, so it's not wrong, not just what I would have preferred.

I will also use more fabric to get a wider skirt. The skirt is mostly gored, with a few pleats at the back and sides, like Osanna's gown. You can see the opening of the skirt in the front, because I forgot to add a hook and eye before posing for photos, but it really is period ;) Though possibly only when someone is putting his hand inside your skirt :) 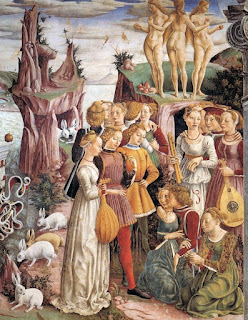 Since it's mostly the bodice and sleeves that were preserved of Osanna's gown it was the bodice that I used prinmarily for this gown.  My gown has a higher neckline than what you in most people's reproductions, but which is what you mostly see in art. Osanna's was even higher, but maybe that's party of the saintly stuff :) Or not really, there's lots of very high necked gowns in the Italian renaissance, but since it is very hard to make a pattern fro a high necked gown when you have the kind of boobs I have I settled for a middle ground. And I'm really happy with it. It has narrow strips of plastic whalebone a the opening to keep the edges from puckering and I love how they curve smoothly over the bust.
The v-neck in the back is from the preserved gown.

Here's a detail, where you can also see the pretty necklace that a woman called Cecilia Fredriksson, who lives on Gotland, made. 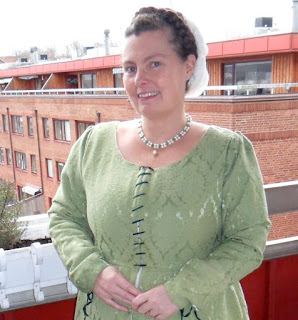 As you may have seen I have been working on a smallish project with the museum in Gothenburg, where I live. One of the things that I studied was knitted waistcoats from the 17th century. The word waistcoats is here used in the period way, which means that they had sleeves too, unlike modern waistcoats. Background research was done mainly through literature on the subject, such as the works of Maj Ringgard, Martha Hoffman, and Gunnel Hazelius-Berg. But I also went through 17th century probate inventories from Gothenburg to find knitted waistcoats, which I also did, thereby providing a background for the silk knitted waistcoat that they have in their collections.

This work was concerned with damask knitted waistcoats of the type found almost exclusively in the Nordic countries (there's one that belonged to king Charles I too).

Brocade knitted waistcoats, what we today would refer to as stranded multicolour or fair isle knitting are on the other hand found all over Europe.

Since they appear to have been worn mainly as undershirt or informal wear there are few images of them from the period, Maj Ringgard suggests in her article “Silk Knitted Waistcoats - a 17th-century fashion item” that this portrait, from Nyborg church in  Denmark may show knit silk waitcoats at the neckline or cuffs. 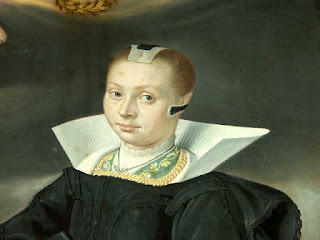 Here's an example of what I think is a brocade knitted waistcoat worn by a Dutch girl, painted by Adriaen van der Linde. The painter died in 1609, so it's either a late 16th or early 17th century portrait. 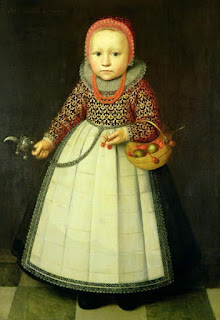 There are quite a lot knit waistcoats for children preserved and it seems reasonable to use this both more comfortable and cheaper alternative to silk brocade for children.

I should now also declare how much I hate tumblr - where people post images of knit silk waistcoats withut and link to where they're from. So these will have to unattributed for now. The top one is probably one of the Norwegian ones though. 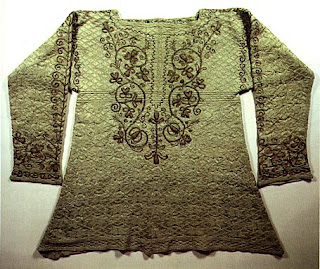 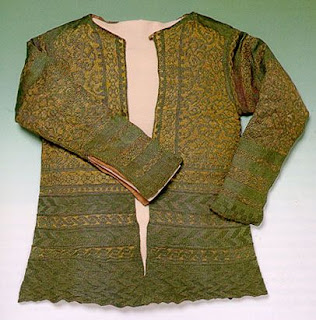 Painting instead of sewing

According to my firiend and neighbour Anna crafting comes in flares, like my arthritis ;)
And currently I have an illumination/painting flare. So no  sewing, just a little knitting on my Eleonora di Toledo stockings. And lots of painting.

So I thought that I would share my recent work. They are award scrolls for people in the Society for Creative Anachronism , the group in which I play.

Award of Arms based on a French 14th century original, though slightly re-designed and with some additions from the recipients life. 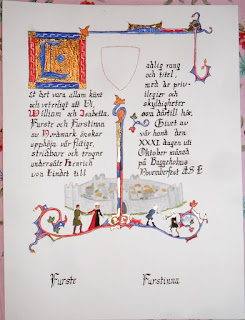 A blnak, that is: one withut a designated recipient yet - I am waiting to fill up the roundle inside the "D" until I know who it is for. Based on a 15th century original, though I replaced the stork in the original with a fighting snail. Because I like snails. 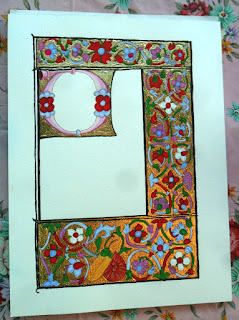 The Order of the Golden Ribbon, for service. Erich who got it is fond of cooking and of drinking (and making beverages), so I replaced the writing cleric in the Italian 14th century original with Erich cooking with a glass of wine in his hand. 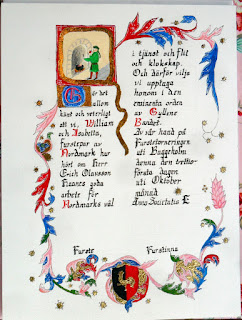 The Order of Light, award for Arts&Sciences for our local and very lovely Gudrun. Based on a 14th century Spanish original. The images are of her knitting, shich she does a lot, and of her standing in a beautiful encampment which she has organized. 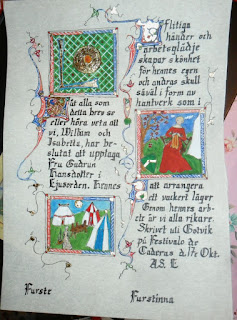 My husband's Award of Arms, calligraphed and designed by my friend Kristina and painted and gilded by me. 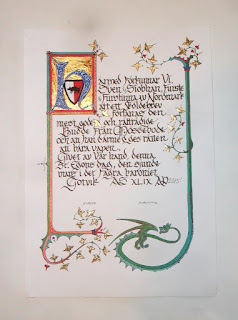 An early scroll, based on a 16th century Flemish original. Before I learned gilding. it now has both has very uneven calligraphy by me and the recipients arms in the shield. 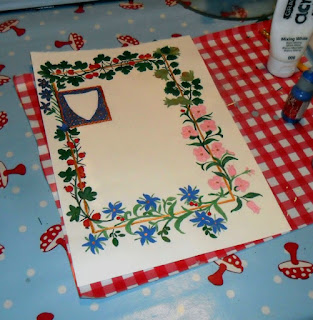 Another early one, the border is 13th century. Not my calligraphy. 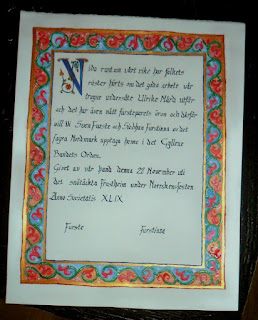 Based on a 12th century original of Boëthius De consolatione Philosophiae. Calligraphy by Kristina 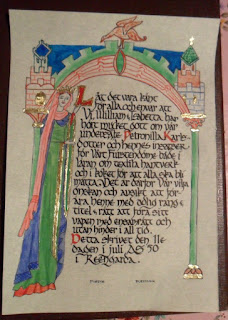