It took quite a few hours to write, but now anyone interested in this costume, or in Swedish women's dress in the 16th century in general can follow this link to get lots of info and images. 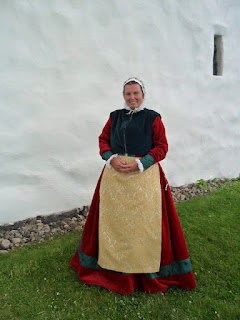 I originally made this haube as a quick solution for my Swedish court gown. I used a metallic brocade that I already had and made a U-shaped piece with the straight piece at the front and the rest gathered with a drawstring.

Two days ago I got the idea to a) make a sort of forehead cloth from the same fabric and to put trim and beads on both of them. I'm rather happy with the result. The shape is given by braids looped over the head under the haube. 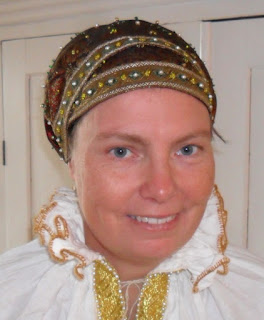 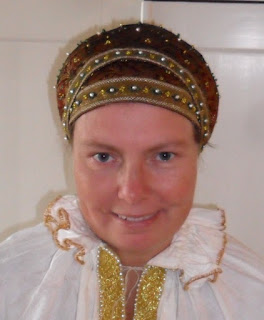 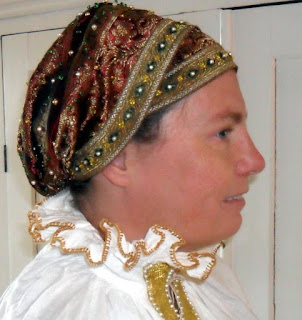 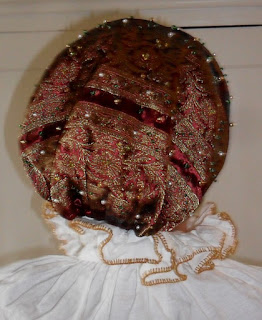 And with a bonnet on top: 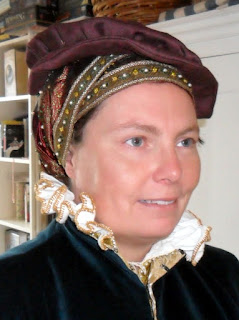 Well, I did all three changes, while having a friend over for tea, later dinner, and Elizabeth R on DVD. It does look better and I can live with the pelatign in front, especially since I intend to wear a narrow damask apron with it, like the Swedish woman in Jost Amann's Book of Women's Costume, that I posted in a previous post. Or this one, which is from Hans Weigel's 1577 Trachtenbuch and shows an unmarried woman from Augsburg. 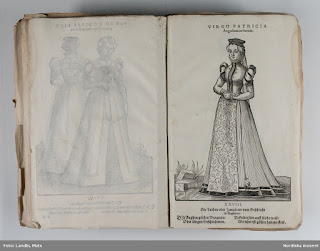 Much better in the back.

And in the front.

The fact that I'm trying it on with a low smock makes it looks rather Italian really. Still not perfectly happy with the pleats in front, but it's good enough. And there will be an apron, as said previously.

The velvet dress is (sort of) finished

So, I finished the dress today. But I'm not totally happy with it. The things that I don't like are:

The first two I aim to do something about immediately, the last I don't know. I have just sewn all those cartridge pleats in place by hand and I don't feel too enthusiastic about ripping them upp right now. We'll see if I can live with it. 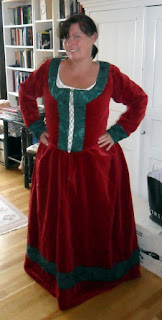 A couple of weeks ago I bought 34 metre of red cotton velvet (120 cm wide) on the Swedish auction site Tradera. 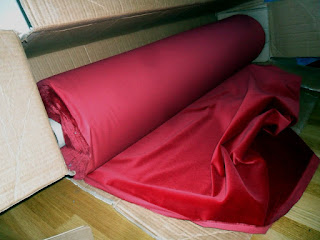 Since then I have been thinking a lot of what to make from it, I will have no problems using up all of it, since we're five in the family and all of us occasionally wear medieval and/or renaissance costumes.
I will make at least two dresses for me, both 16th century. Anéa of Anéa costumes talked me into making a version of the preserved red velvet gown in Pisa. I have to figure out how to make the trim first though. The other dress is a Swedish/Northern German style gown with a guard in green damask on the skirt. The skirt is now finished, I sewed it and the guard on it yesterday and today while listening to Harry Potter and the Deathly Hallows as audio book - holiday is good.
The skirt is 4,5 metres wide at the bottom and about 3 metres at the waist, I have a thick waist  and wide hips so I need som width there. Making it straight was never an option, since not only all preserved gowns from the 16th century, but also all pattern books from that century show only skirts that are gored to make them wider at the bottom. It not until the 17th century that you find unshaped skirts, like a cylinder pleated to the waistband. 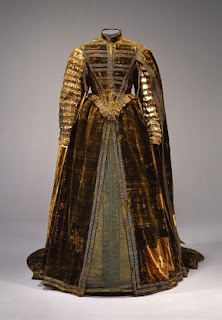 A pettern for thos gown can be found in Janet Arnold's Patterns of Fashion 3, where you also find another gored 16th century skirt: the funeral dress of Eleonora di Toldeo.

Likewise pattern books or manuscripts such as the Milanese Tailors Book or Juan de Alcega's pattern book also show gored skirt patterns. As does the Leonfelder Schnittbuch. Unless Marion McNealy's soon to be published book with three German tailor's books from the 16th century proves otherwise I think we can safely say that gored skirts is the way to do it if you want an authentic 16th century cut. At least from Central Europe, Italy or Spain.

A woman's gown pattern from The Milanes Tailor's manuscript. Note that there is no bodice pattern, bodices were apparently supposed to be fitted to the individual client. 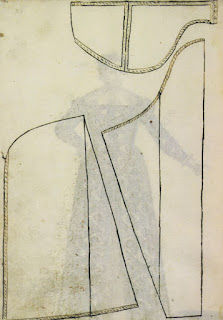 Talking about the bodice; I haven't started on that yet, because I am in the process of losing weight adn tehr eare still a few months until the next event that I am going to so I should probably wait a while before starting on it.

I am planning to make something like this. Which is a Swedish woman's costume from Jost Amman's book of women's fashions from 1586. Given that many of the illustrations are virtually identical to Hans Weigel's Trachtenbuch from the 1570s I would guess that the style is more in the 1570s or even 1560s style. 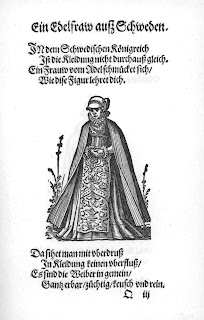 Of course Trachtenbücher are problematic sources to manners of dress, not only because of the time lag I discussed above, but also because the printers/authors had little knowledge of areas far from their bases in Western Germany or Italy (the two great centres of production for these kinds of books in the 16th century). Sweden is, however, not that far away, at least not culturally and the dress at least looks plausible, as it is a German fashion and Swedish manners of dress were very influenced by German fashions.
The reason I chose it as inspiration is, however, that it appears to be worn sligthly open at the waist, like many other German 16th century dresses. Like this oen from Frankfurt, which also shows the partlet better: 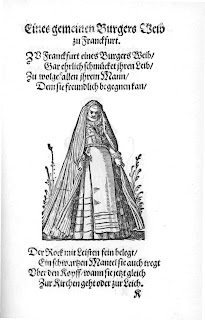 I thought that it would be nice to be able to wear the bodice slightly open in the beginning and then when I hopefully have lost weight I can lace it shut. It's a good idea in theory at least ;). And I will make a damask or brocade apron too - I have wanted one for a decade or longer. I don't plan to make a pleated cloak however, but plan to use my teal short coat or my wool lose gown over it when I need another layer.

Anyway, here's the skirt, draped over an armchair. 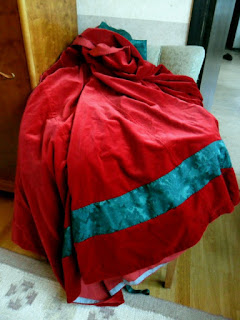 Update on the stockings

After unravelling one finished cuff, because it turned out too large, despite thin needles I re-started and how now finally reached the point where what I knit will not be hidden by the turned down cuff. It's nice and simple knitting for a while now, like utnil the heel, which isn't very complicated either.

Knitting on the balcony, it has been hot these last days. 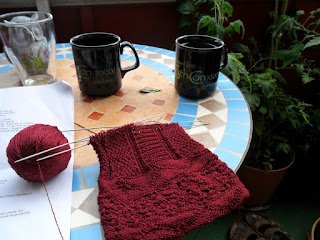 The other mug belongs to my friend Anna, who is making an awesome blanket from granny squares: 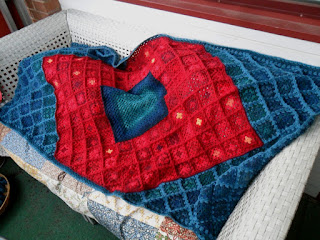 When it got too dark to knit outside I had gotten this far: 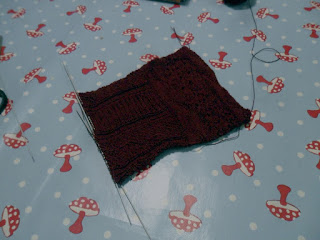 They will definitely be finished before christmas.

Free reading of 50 articles from "Costume" through July

To celebrate its 50th anniversary Costume - the journal of the costume society, one of the most important scholarly journals on the history of fashion and dress, is giving free access to 50 articles throughout July. Here's a link to it.

Unfortunataley mine from 2011, Women’s Dress in Sixteenth-Century Sweden, isn't one of them, but maybe you can access it through your library if you're lucky, since Costume is an e-journal also. 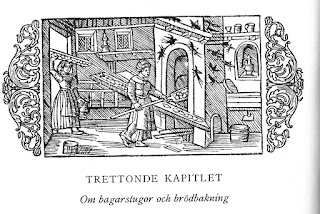