I just might accidentally have bought 6 metres of 80% wool-20 % modal (so sue me for using a wool/cellulose fibre blend ;) ) for this gown today. 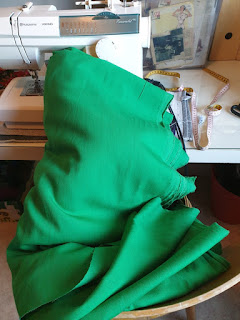 You don't often find bright green wool. Now I "just" need good fake fur for  lining the sleeves and some for edging the hem. And silk for the under gown with its gold fringed wide sleeves.

having gained back 20 of the 40 kilos that I lost two years ago I rarely feel small tehse days. Except when trying on Måns' houppelande. He is of course much slimmer and in a better shape than I will ever be again, but he is also taller and have broad shoulders. So I look like a kid dressing up in mum's dress. 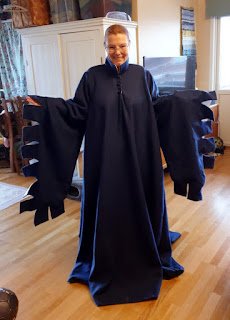 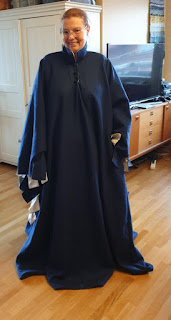 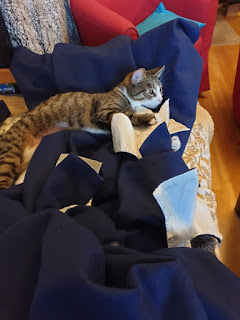 Last weekend I went to a semi-local (c. 2 hours drive) SCA event called Boar Hunt. The main activities were an archery trail in the nearby forest, where we shot at plastic and paper animals (3D and flat), a lunch inspired by a hunting lunch by Gaston Phoebus' Book of the Hunt , followed by fighter traimimg where the fighters took the roles of hunters, dogs and boars. I took part in the archery trail, and it was great fun. This was my first real attempt at archery - I have tried it a little at a friend's place once and one shot at St.Egon this year. And I hit "animals"! Not many, but still.

Fot this I wore my pink cotte with a green surcoat made from handwoven wool twill, based on Herjolfsnes 39, though without the piecing and the lace holes in front. I also wore a bycocket sewn from wool flannel and lined with silk. It was dark in the forest, which affects the photo. Especially since it was also raining. 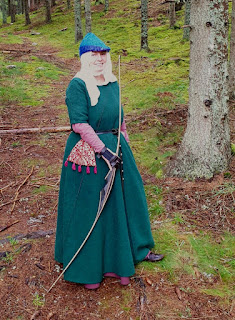 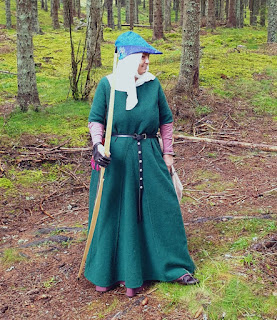 The way I wore the wimple, veil and hat were inspired by this Italian mid-14th century image, though I should have worn a bigger wimple. But I forgot to pack one. 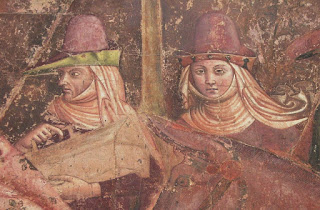 Other things that I forgot was: one garter, my knife and fork and a quiver. My arrows were kept in a cotton tote bag tied to my belt instead.

There was also dinner, and court: Princess Jovi and Prince Stigot of Nordmark. 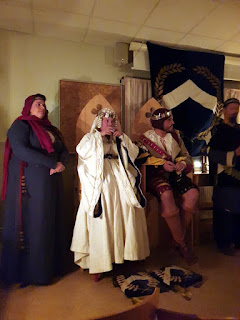 I dressed in Italian 14th century for court too, here I am posing in front of the Nordmark banner after everyone had gone for dessert.