This is how happy you look... 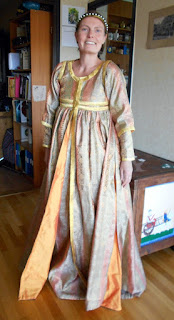 Now to the task of writing a page about it, but that will have to wait, I have real life work to do, and I still have a bad cold.
Upplagd av Eva kl. 09:59 2 kommentarer:

Help me research YOU!

So, I have this side research project gong on, studying you, and myself, for a conference paper, and I would like you help me. I have made a survey on the re-creation and wearing of medieval dress.

About the survey:
This survey is a part of a research project on the choices and priorites made by people who re-create medieval clothing. It is inclusive and tries to cover both re-enactors, groups such as the SCA, LARPers and those who make medieval clothing In other contexts. For the purpose of the study "medieval" has been defined as the priod 500-1600. The 16th century has been included even if it's not part of the Middle Ages, because one of the largest groups which re-create medieval clothing, the SCA, include the 16th century in their re-created time period.
There will be questions both about your ow choices and practices and about you opinion on the choices and practices fo others. In the latter case "others" can be other people in general, or people taking part in the same re-creating activity as you do, the interpretation is up to you and you can define which in the comments if you want to.
You do not have to answer all questions, but the results will be more reliable if you do, so I am grateful if you complete the whole survey.
The point of the survey is not to judge, either from a point of period correctness or based on any moral criteria, but to study practices among those who make and wear medieval clothing. I will not judge you either for making all your garb from polyester and glue, nor for wanting to (metapphorically) burn those who do.  It is anonymous, and the information you provide about yourself will only used for statistics and not published in connection with any individual comments or answers.

About me: My name is Eva I Andersson and I am a historian working at the Department of Historical Studies at Gothenburg University in Sweden. I eared my PhD in 2006 on a dissertation medieval dress in Sweden and Norway. Since then I have mainly studied Early Modern dress, gender, and consumption. My professional web page can be found here

I have also made historical clothing, mainly medieval, since 1993, and this experience lies behind my interest in the practices of  re-creating medieval dress. (You know this if you're reading my blog ;) )

I didn't think I was going to do this

But I actually made a page for the German early 16th century gown. It's here. 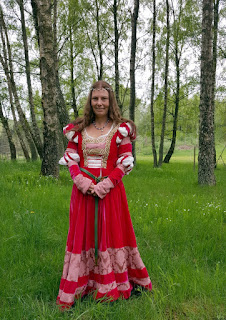 I've made the first item in my 1330s outfit from Genoa

So, in March I wrote about this illustration from the Cocharelli Treatise on the Vices. 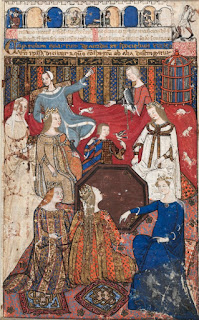 If you follow the link above you will find some reasoning about the clothes depicted, and further links to other posts that I have written about the weird high waisted gowns of late 13th-early 14th century Italy.

Surprising no-one I decided for an insane striped version, though I plan to make the white version too later, from white cotton muslin I think.

I had to look around for a while to find striped brocade, because I didn't feel much like piecing together two brocades to make stripes. To my great joy I found it at Vedah Designs on Etsy, and promptly bought all of it :) I also got lining tehre, because you don't want to wear unlined brocade with those floating metal threads on the back of the fabric.

The lining is a shot silk mix in bright pink and saffron yellow. 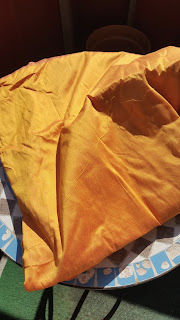 And this is the tunic. 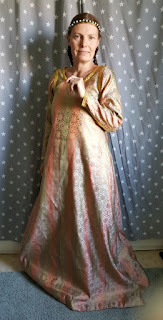 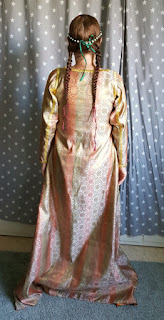 There is gold trim around the neck, wrists and armscyes, and along the seam on the back of the sleeve.

I have cut out the pieces for the overgown, but haven't started on the sewing yet.

While the more ambitious of us (or those who have access to a wood working shop, or at least don't live in a flat) make their own beds I decided last year when I started making my painted chests (1 and 2) that I wouldn't make my own bed, but instead buy this cheap bed from Ikea. We bought it just before Double wars last year, and have thus used it twice now.

Here are some photos from my pavillion this year: 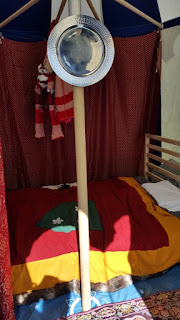 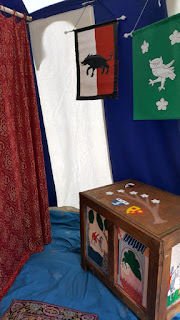 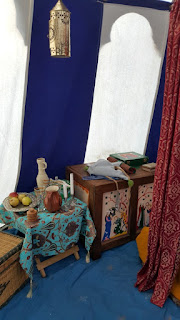 In the top photo you see the headboard of the bed, and while not glaringly non-medieval I still wanted to make it fit in more with the rest of the furniture, and with period images of beds.
Especially since a lot of people now have bought the same beds.

So glued some 1mm plywood on to two of the bars, making it look like a whole board there, and stained the whole bed with the same paint as the chests. I also painted our devices and some patterns on the "board" of plywood, and added two wooden knobs that I had painted. 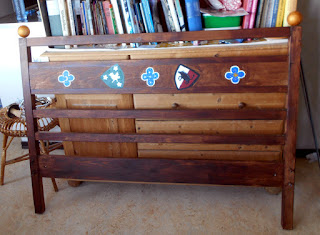 I think it will look really nice when we camp next time.
Upplagd av Eva kl. 06:21 2 kommentarer:

At Double Wars 2018 there was a party sponsored by the Ladies of the Rose (former queens in the SCA) and somehow that got me inspired and insane enough to make a 16th century Saxon Court gown which would have suited Barbie. In pink (synthetic) velvet and rayon brocade, both from my stash (the velvet was a gift many years ago).

I was obviously inspired by the paintings of Lucas Cranach the Elder. 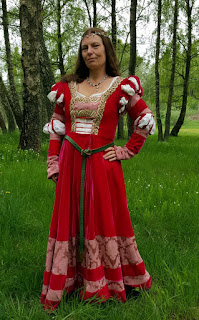 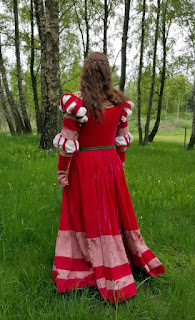 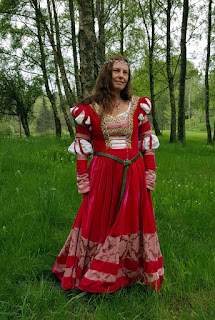 The skirt is a full circle. I was really,. really short on fabric, so it got just a little bit shorter than I wanted. 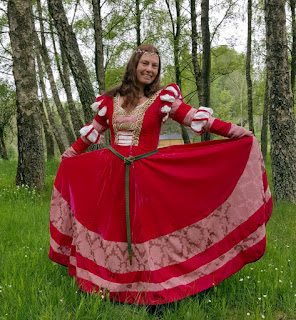 The front edges of the bodice are stiffened with a row of hemp cord. The pink band over the bust is sewn to one side and pinned to the other with two large brass pins. The

Less Barbie-like, with my hair covered by a net. I need to make another oen if I'm going to wear this gown more seriously. And I probably will, because I look pretty in it and despite being made mostly as a joke and from non-period materials, it is well made, and with no visible machine seams. 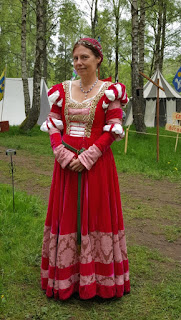