Since it requited me standing up for a longer while it was not until today that I got around to cutting the batting for my quilted 13th century aqueton - my Golden Egg challenge.

The cotton batting that I had bought was way too thick for the project, but also quite easy to take apart into layers.

First I cut the batting after the shape of the linen pieces, and then I pulled the layers apart. 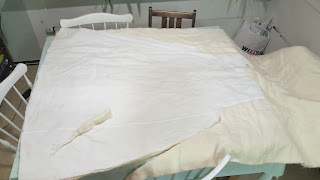 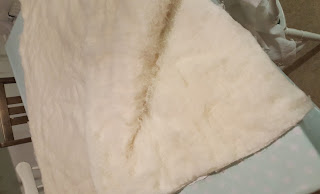 I then pinned the second layer of linen on top of the batting. To secure it further I basted around all the edges, along the seams where the side gores are attached and from neck to hem in the middle. Helped by my trusted assistant Miss Esau (she's named after a cat in a Swedish comedy sketch, and we thought that we were going to have a boy cat again, but it works well for her too). 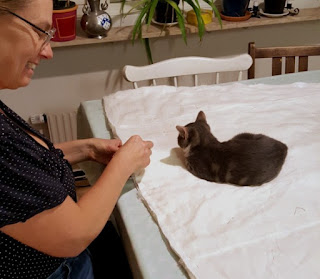 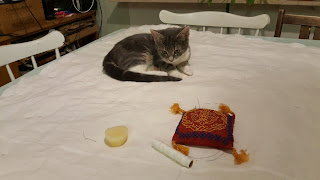 Then I removed to my couch and started quilting in front of the telly. 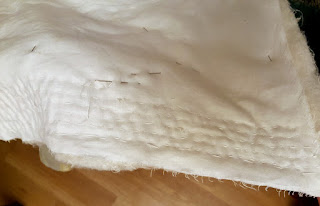 Apparently it is very tiring to help out. 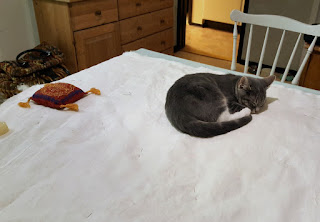 After trying all my old rayon brocade curtains with my teal cotton velvet to see which worked best together (and which I had enough of) I chose a cream damask. Unfotunately, while it was pretty, it was something about the combination that felt more modern pretty than period pretty.

The woman to the left in this image from Das Sächsische Stammbuch by Lucas Cranach the Elder gave me the solution: 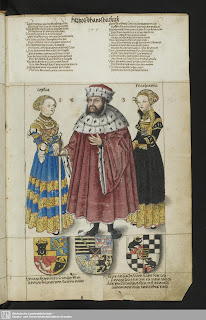 On both edges of her gold brocade borders there is a rose red ribbon/trim. You also find this on her sleeves and crisscrossed over her brustfleck.

So, having decided that I spent weeks trawling the internet for trim that wopuld look nice, but not cost an arm and a leg, since I would need over 25 metres of it.
There was a deadline for this too, since I was going to have a rather big surgery done on the 15th of November, and would not be able to leave home to go shopping for over a month after that. I was beginning to despair. But then I remembered this trim from an earlier visit to Göteborgs Remfabrik, a factory museum that actually makes trim, on 19th century machines. 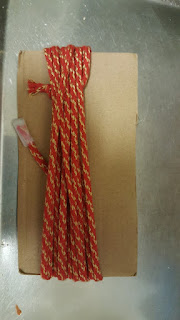 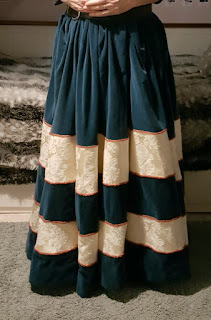 It is not attached to anything, I've only gathered it with a belt. On top of the thick medical corset/girdle thingie that I will have to wear day and night for three weeks after the surgery, and at lleast one more week during the day, to help my flesh bond with the titanium net that they put tehre to keep my intestines inside my diaphragm instead of outside.

It will probably take quite a while before I have any idea of how my waist, well, most of my torso, will look so I don't count on making the bodice before spring. But at least the skirt is finished. And it's not like I don't have a lot of other craft projects to work on.

I am very tired and can't sit up for long times, so hand sewign and some knitting is what I have been doing. The latter is, however, made more complicated by this little lady, who bites off my yarn. 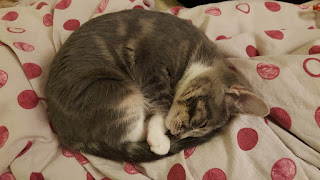 We have also adopted another rescued kitten, who was born in teh wild, and is c. 16 weeks old. Shhe mostly hides in the bathroom, but has started to come out more and more, even when we are at home and awake. 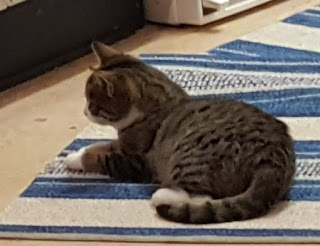