This weekend was one of Gotvik's two annual events: St.Egon's Feast (Egon is a fictive saint who protects us from foul peasants and rains of herring). I was busy having fun, and drinking wine, so I only have a few photos. But among these are the first photos of me wearing my coronet with medieval clothing and not a t-shirt :)

Next to me is my friend Amanda, wearing another one of my early 14th century Italian gowns. 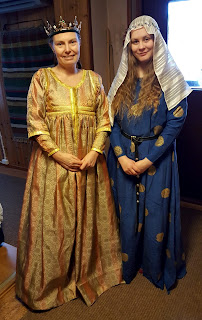 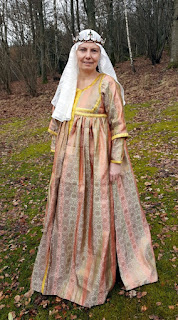 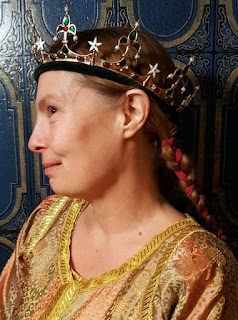 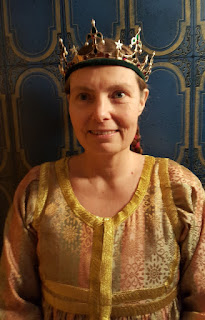 This was the first time that I wore my 1330s Genuese gown to an event too. It is nice that the coronet is based on crowns seen in Italian art from this period, though I of course will wear it with clothes from other time periods too.

As I've said in other posts the coronet is made by Johanna Lawrence and it is not only pretty, but incrediby comfortable - I wore it for six hours and actually forgot that I was wearing it.
Upplagd av Eva kl. 10:02 3 kommentarer:

An exercise in anachronism - a box for my coronet 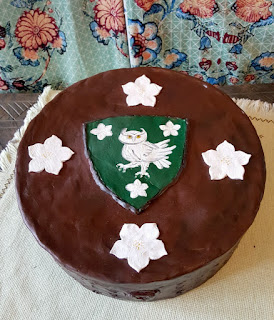 Since I now have my pretty, pretty coronet, I also want to protect it. The coronet is made in a medieval way, with pieces with hinges. The white enamelled flowers are the pins keeping it together. 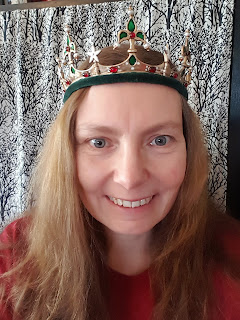 So when travelling with it on a train or plane the separate pieces will be packed in small velvet pouches to protect them. But when I travel by car, or when I set up my tent and want everything to be pretty around me, I will use this box. 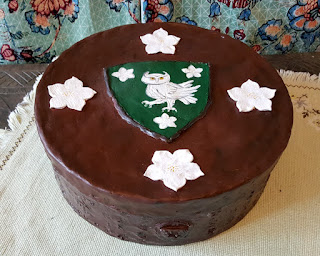 It looks a little bit like boiled leather, which is what mostly have been used in the Middle Ages, or leather combined with wood. But since I don't have easy access to leather or a good workshop for that kind of jobs it is a cardboard box covered with paper clay. Thus an exercise in anachronism. Luckily that is part of the Society for Creative Anachronism.

The inspiration for using paper clay I got from seeing my friend Agnes' amazing notebooks made with paper clay. She is really, really talented in many crafts: she's making amazing cakes, notebooks, fairy houses, posaments (viking style metal wire ornaments) and historical jewellery, and probably much more that I don't know off. You can see, and buy her stuff, in her Etsy store: By Hand and Paw.

To protect the coronet on the inside the whole box was padded with 2 cm thick foam rubber. Using a pair of scissors I hollowed out a groove in the bottom piece for the coronet, before covering it with fabric. The fabric is tacked down with thread in the hollow too. Then I glued the piece to the bottom of the box with PVA glue. The groove is (reasonably) centered, it is the photo that is a taken at an angle. 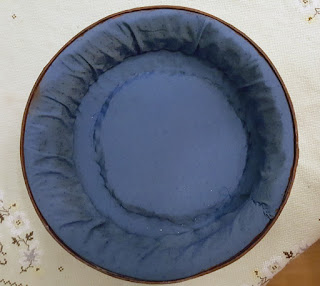 Then the sides were padded. Because of the angle of the coronet, I had to shave off some of the foam rubber at the top edge. Not so easy to get even with just scissors, but the fabric covers some of the unevenness. This was alos glued to the sides of the box. 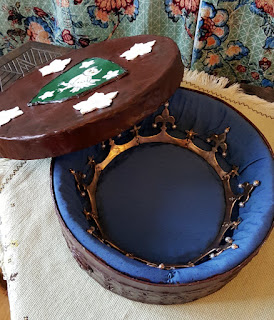 Finally I added a smaller circle of foam rubber covered in fabric to the lid. 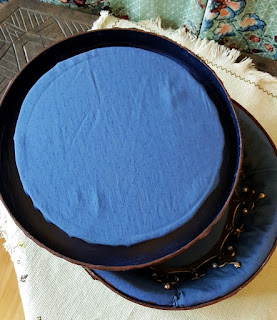 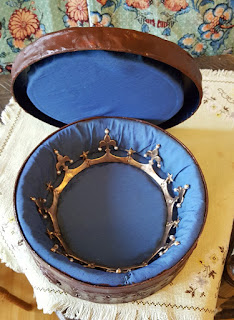 In the hollow inside the coronet I will probably keep a fabric bag with fake hair, hairnet, ribbons etc.