Since last weekend I am no more the baroness of Gotvik, and have passed on the glasses and cases that I made to the next baron and baroness. Of course I have replicas of historical glasses, but ever since I first saw them I have been fascinated by painted glasses from the Middle Ages and Renaissance. Especially the beaker shaped ones from the High Middle Ages, I wrote about them here, with a few pictures.

Unfortunately I haven't found anyone who makes plain beaker shaped historical glasses, they always have some kind of decoration. I am not sure if I would have dared to harden the paint in the oven with a historical replica either, but probably.

Since I can't have historcial replicas to paint on I have had to make do with a substitute with reasonably the right shape: beer glasses.
The upside to this is that they are very hard to break. And you can get them cheaply from 2nd hand shops. 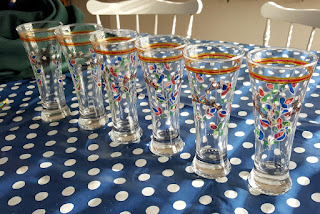 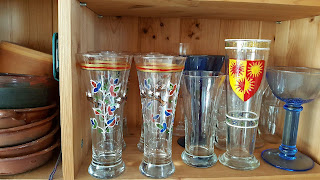 The motif is my badge, surrounded by flowers, which were taken from the Aldrevandini Beaker in British museum, made in Venice in the 1330s. 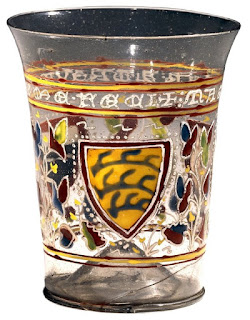 The arms of the Aldrevandini family also has antlers, which provided the basic shape for the ones on my glasses, which are my personal badge in the SCA.

In the SCA you can register both your heraldic device/arms and one or more badges. This is based on a period practice: Since arms were hereditary it was  common among the nobility at least in the Later Middle Ages to also have some kind of badge which signified yourself, rather than your family In the SCA arms are personal so the distinction between the two is roughly that my arms say "here's Aleydis" and my badge say "I belong to Aleydis". Badges can be jointly owned too, so that they signify for instance a household, and while my badge technically is registered to me only it can be used by any member of my family/household.

My badge is a deer's antler with a white cinquefoil, that is a flower with five petals, om each tine. The flowers reflect my device, and I got inspired to put them on the tines of the antlers from this Codex Manesse image. 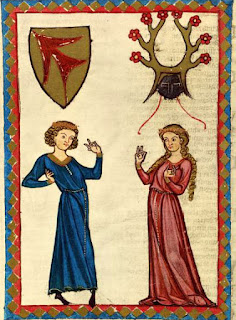 Next step is to make  box for all six glasses that will make it easy to bring them to events.

I made this gown from Maja in 2016, intentionally too big, so that a class mate could use it for a theater play they put up at school. 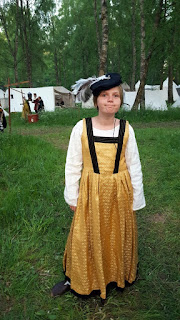 Then she grew and the bodice fit much better but the waist is a bit higher, making it more of a c. 1500 Italian gown. So I unpicked the black trim that went down to the waist both in the front and in the back, inspired by the trim placement on Eleonora di Toledo's gown.  Her changed shape meant that the neck opening was too narrow, so I had to unpick that trim too and widen it.

I also made tie-in sleeves and added some of the yellow fabric (the very last piece) at the bottom of the skirt. 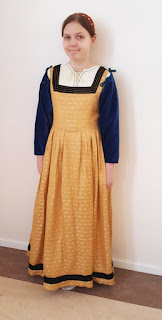 She's really not that keen on having her photo taken ;)

I had hoped that it would be enough to take in the bodice of this gown only in the sides, and not have to unpick the gold trim and all the fake pearls around the neck, but unfortunately not. I tried, and I tried, but in the end I had to cut off the straps in front and move them closer to the middle. 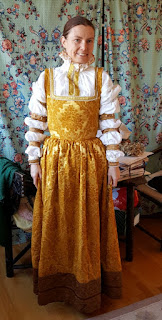 Yesterday I sewed the skirt to the bodice by hand at Gotvik's sewing meeting, which I hold bi-weekly at my place.

The sleeve bands are too wide over the biceps too, but I'm not sure if I want to take them in permanently yet, since I have started going to the the gym every second day.

This is how it should be worn: with a loose gown over the kirtle and with some kind of headwear.

The page where I discuss the outfit more in detail.

A sottana and camicia based on preserved 16th century garments

One of last year's big projects was making a reconstruction (within certain limits) of the funeral gown of Eleonora di Toledo, duchess of Florence, who died in 1562. This included the gown, a netted caul and partlet, and a camicia (smock) based on another preserved 16th century garment, this one from Prato, another Tuscan town. 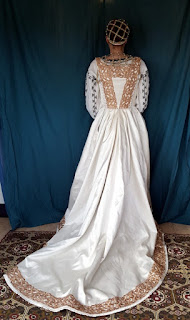 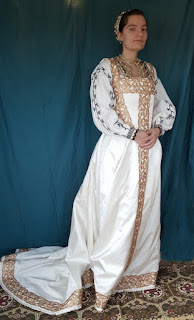 You can read all about it over here, on its own documentation page, where there are also lots of photos.
Upplagd av Eva kl. 01:02 Inga kommentarer:

Writing the documetnation will take a few more days, but for now I give you two photos of Valeria in her Eleonora di Toledo gown. 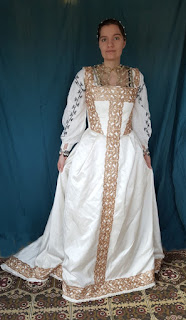 Previous blog posts about this project:

The fabric - guess what I'm going to make?

What I am making for Valeria

The embrodered camicia ready to be worn

Details of the construction of the skirt.