Yesterday these lovely metal buttons arrived from India (Indian Beautiful Art on eBay). They're naturally not based on a medieval find, but I think they have a lovely gothic feel to them. And I now have 140 of them. maybe 16 will be used on Måns' gown, and I will doubtlessly find use  for the rest . 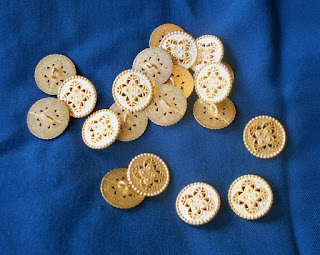 I need a green sleeveless surcoat. 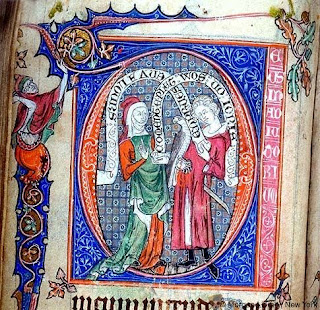 And a red open hood with white lining. Obviously.

Possibly. I may add another row of metallic braid aroundthe edges of the gold trim.

Anywaym, I have now sewn around all the edges of the gold trim with sewing silk. I have also made  46 lacing holes, half of them through both fabric and trim, as on the original. It wasn't as bad I thought that it woudl be.

So yesterday Valeria tried it on. She fluctuates a lot in weight, so it is a little big, but I don't know if I am going to take it in and inch or so (in total). I won't do it until we have tried it on with a full linen shift instead of a slinky t-shirt in any case.

I am also going to attach another lining on the inside so that the threads from sewing down the trim isn't visible, and that will also add some bulk. 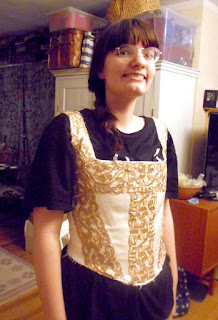 As you can see it it s little long at the sides, but that will be remedied when I attach the skirt, in the back it looks just perfect. 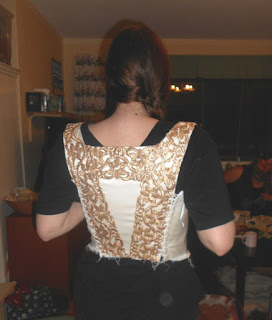 Since I have been making clothing from this period for over fifteen years now I have of course learnt a lot, discarded some ideas and tried new ones regarding the fillets, coffee filter hats or whatever you want to call them. So I thought that I should share three different fillets that I have made, and the inspiration for them.

More generally I have written about headwear options for women in this period in this, rather image-heavy post.

It is important to note that these are in period texts considered as part of the veils, chin band etc, what in German would have been called gebende, a word related to ribbon, at this period, and one that I like a lot, because it includes all parts of the (mostly) linen headwear. They were therefore also of the same material and colour as the veil, chin band or wimple etc.

In fact, it is clear to see from 13th centry images that they originally were a strip of linen would around the head. These two are from a French manuscript from the 1220s - and you can even see the pin holding it together. 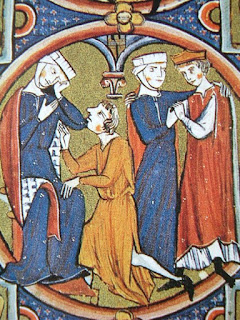 This lady, from the Worcester cathedral, from the 1240s, has a pleated band wound around her head as a crown, but we can see where it overlaps. 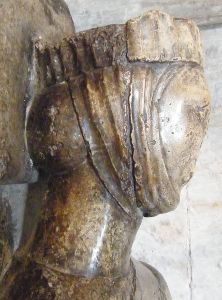 This 13th century lady from Dryburg Abbey appears ot have wound her pleated strip twice around her head. 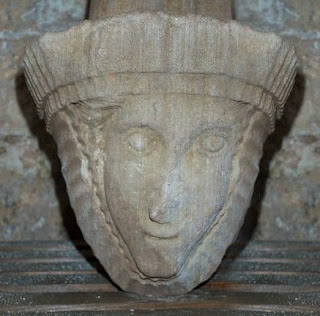 I haven't worn this variant yet, but since I have five metres of hemmed linen strip to wind around my head this is probably just a matter of time. And of boiling starch.

Later one they appear to have become a separate piece, worn over the chin strap and sometimes also over a coif, but always under the veil, if worn with a veil (see the post linked above).

A lot of these were plain, and I have one of those too, bust since it's only a piece of linen, cut at an angle at the edges, folded over, sewn together and starched slightly I didn't bother to take a photo of it. 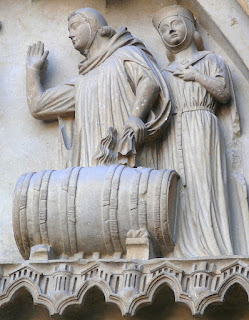 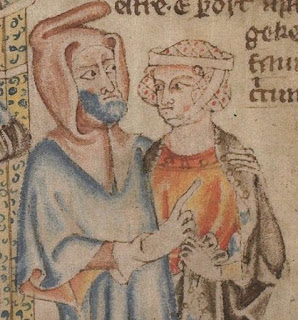 But, there are also more decorated ones, in one way or the other, and that's what I am going to show you three examples of. 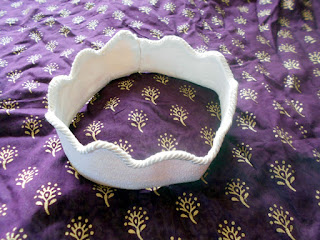 This is  a fillet with a "wavy" edge. These are rather common in art, but whether the many examples of fillets with this kind of edge is the artists' way of showing pleating or actually shows a wavy upper edge is under debate. I however think that it is unlikely that so many artists, who have no problems showing pleats on for example sleeveheads on gardecorps should be unable to draw them on women's headwear.  I think that there were several different ways to decorate a fillet, pleated, with a wavy or scalloped edge, edged with a braid etc.

This fillet is based on St. Anna on this early 14th century altar frontal from Odda in Norway, seen below. 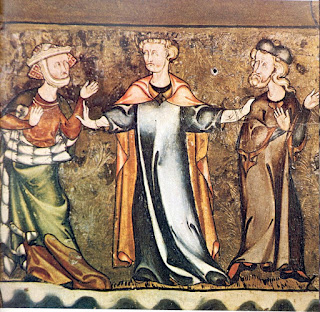 Both her fillet and and her "chin strap" has rows of decorations which I have interpreted as braid, but could also be embroidery for instance. Another example showing a fillet with an edge of something thicker, maybe a braid, or a rolled piece of fabric is this s seal from c. 1300 (picture showing the imprint) 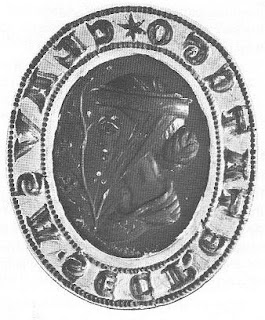 My fillet has a silk cord sewn to it, but a more period solution would be a hand made braid or cord. The fillet is made from linen in a diamond twill, to add some interest to the simple white colour, and it is stiffened with heavy fusible interfacing. This was my first fillet, and today I would have either chosen vellum, which I'm told was used to stiffen some 13th century Spanish hats, or starch.

To make the top wider than the bottom the pieces are cut at an angle where they are sewn together. 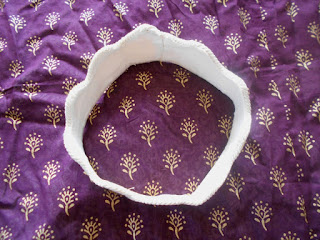 A few more wavy fillets with some kind of edge decoration at the top: 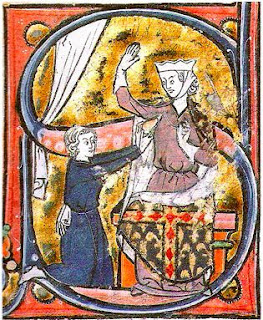 And the ever popular Grosse Heidelberger Liederhandschrift. 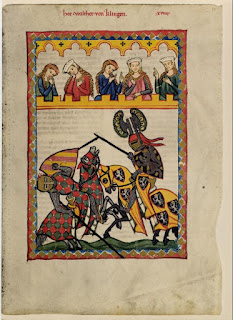 2.
This fillet instead has a scalloped  edge. 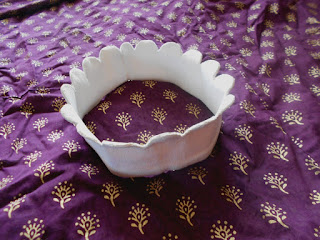 There are quite a few images of these too.
My first inspiration, the violent woman in blue in the Trinity Apocalypse. 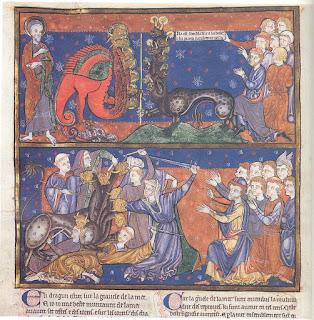 This one, from teh Maciejowski Bible also appears scalloped.

But it is also slightly shaped, since the edges stand out. To achive this there is a wire sewn along all the scallops bty hand, before, again by hand, sewing the outer and inner layers together. 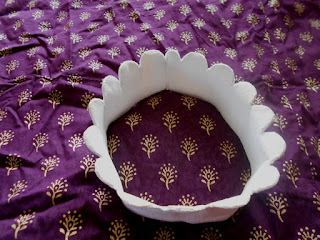 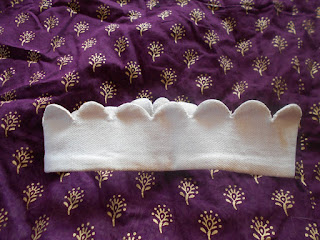 Here you see that the strip is angled at the back. 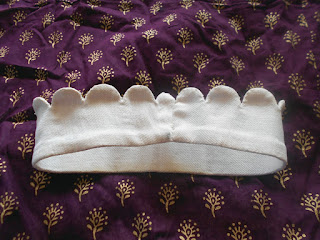 3.
Finally we have a pleated fillet, which is new, I made it this autumn.

This is not my first try at a pleated fillet, but the less said about that other one, the better.  I sewed wire to the edge of many metres of linen and knife pleated the whole thing. It was not a success. This one is also made from a long strip of linen, but instead of knife pleating it all I sewed tucks on the strip, levaing the top 1,5- 2 cm. After hemming it all of course. 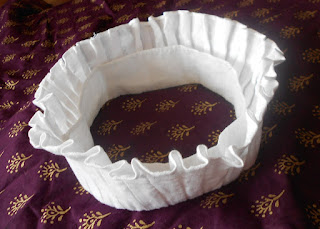 To give it some stability I sewed a strip of linen to the bottom edge. I contemplated sewign teh pleats to teh top edge of this strip too, but as you can see on the photo of me above, it keeps its shape pretty well anyway, with the help of spray starch. 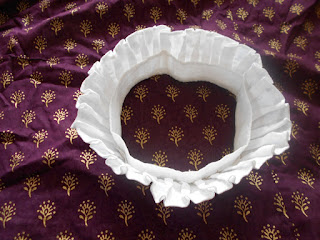 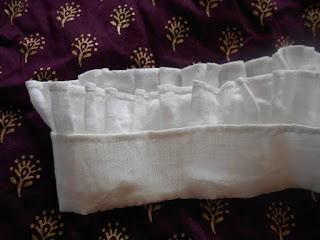 This, absolutely fabulous photo of Countess Margareta von Brabant, married to count Gerald von Gerle, taken by the German re-enactment group Amicorum Gratia shows a pleated fillet from above, and you see that it is double, though the inner layer also appears to be pleated. This may be next on my list. Again, this my be a strip of linen wound twice around the head. 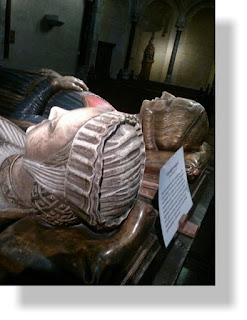 I'm not sure about this cosntruction with the tucks, but it does give a good Maciejowski bible look. 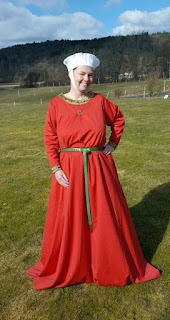 This Italian manuscript from 1241 shows either a pleated, or a scalloped fillet which has decoration in yellow on it. I'm guessing pleating. 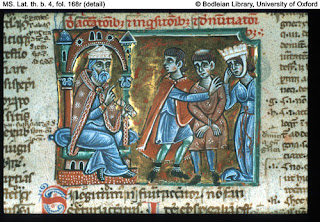 This german one appears to have pleats both at the top and the bottom, and not much of an angle. My guess is that this is still a strip of linen just wound around the head. 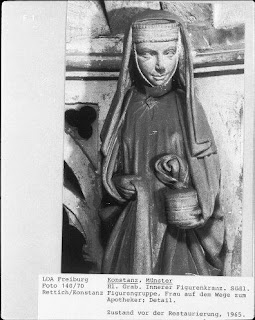 This one, from, the Rutland Psalter (ca 1260) is probably pleated in some way, but much less so than the one I have made. 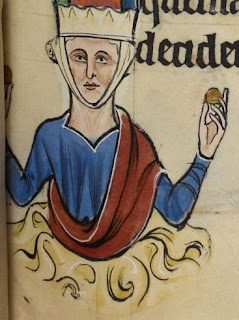 Anyway, there are a million medieval images showing this type of headwear, and showing these was not the point of this post, but to show different variants that I have made. And, hopefully, point out that these are three interpretations, and that there are many more to make.