A start on the aqueton

Well, apart from test quiliting and reading the only thing that happened this autumn with my version of the aqueton of St. Isabelle of France was that I bought the linen fabric and the cotton batting. Well, I also prewashed the fabric.

Btu I have been working so much and also travelling, for conferences, study visits and the SCA. But tonight, when I was too tired to try to work I actually cut out the linen pieces. This photo shows the main body pieces; there are also four gores, two at each side, which are triangles with the tops cut off. 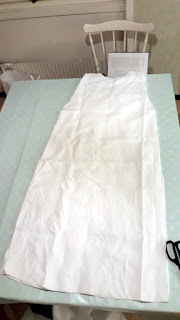 At Drachenwald Crown Tourney I was the herald for sir Franz von Hohenklingen and his lovely wife Ida von Hohenklingen, who do early 16th century German. And for years I have promised him that I would be cheerleader if he ever fought in Crown.
So when it was announced two weeks before the event i started making a landsknecht cheerleader outfit. And pompoms. In the heraldic colours of sir Franz. The material is mainly polycotton from my father adn some remnants of purple cotton satin. 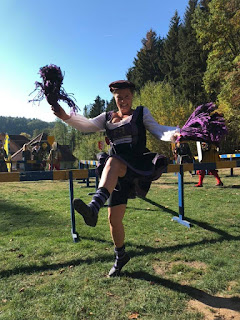 For preserved modesty I wore bike shorts under it.

I walked in wearing my long 16th century velvet robe, and only at the end of the boast that I had written for them I took it off and got my pompoms out of its pockets and started jumping and shouting.

I also heralded/boasted for Fru Margareta Arvidsson, fighting for Herr Erik Dalekarl. Fortunately they marched in before Franz and Ida so I looked reasonably normal when I heralded them.