As I have written not only one, but two blog posts about it was not uncommon in the 13th and 14th century to have sets of clothing made from the same material, intended to be worn togeher. This blog post writes about it in general, while this one deals with the document that was the inspiration for this set of clothes. The 1293 trosseau of Isabella de Bruce, soon to be queen of Norway.

The set consists of a cotte, a sleeveless surcoat, a surcoat with 7/8 sleeves, a cloak an a hood. The are all made from murrey wool twill, which photographs horribly. The surcoats, hood and cloak arelined with white thin silk, wit a small woven pattern. For the photo session I decided to try out the look from the Naumburger Dom, with a gebende and a braid hanging down my back (scroll down if you follow the link). Since I didn't have either a crown or a pillbox hat, a pileus, I decided to wear a linen fillet with shaped edge. Both the gebende and the fillet are of course made from linen, the latter from hand woven linen twill.

In these photos I am wearing the cotte - and the cotte and the cloak. 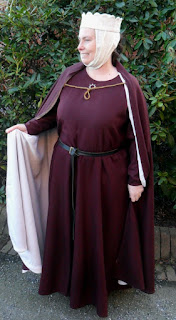 Her eyou see me with the sleeveless surcoat, with and without the cloak. 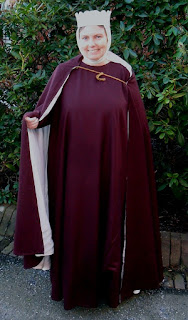 Again with the sleeveless surcoat. teh fake braid is too long, and could ahve been blended better with my own hair, but this was the first time that I tried to mix it with my own hair and I was kind of in a hurry, sinc emy husband/photographer, was on his way to play X-wing. To the right I am wearing the surcoat with sleeves, which really is too narrow over the chest, I will have to bind my boobs before wearing this one. Unfortunately I didn't check to see if the necklines of the cotte and surcoat were aligned. 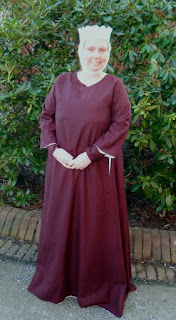 Here's a better photo of the surcoat with sleeves, it even gets the colour sort of right. 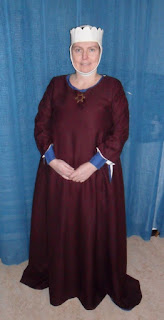 And an old photo of the hood. I am going to make a larger one, I can't fit any headwear under it. The small collar of piece is typical of th 13th century, as is the short liripipe (not visible in the photo), but it definitely needs to be bigger. I'll give this one to someones's kid instead. 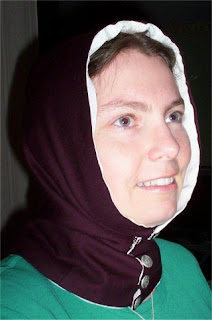 The cotte is roughly baesed on the later Herjolfsnes 38 gown, except that I made it more A-line shaped, to keep the look of the late 13th-early 14th century. The reason for this is that I wanted a good seam to keep open for nursing. 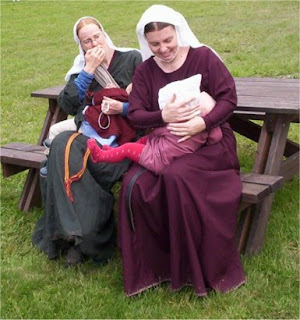 The side was kept in place just with a belt, and it worked very well. I used a shift with a front slit and moved around the fabric when it was feeding time. By putting the slits in different place I minimized the risk of unwanted exposure.

The surcoats are instead based on St Elizabeths and St Clare's gowns, both from the 13th century (the sleeveless surcoat is based on St. Clare's and the sleeved one on St Elisabeth's). The cloak is semicircular, as cloaks from that era tend to be.