The knitting insanity has begun

After reading up about 17th century knitted silk waistcoats/nightshirts I was rather tempted to make one. Well, until I had a closer look at the one in our museum, which I wrote about in another post. I didn't mind knitting with thin yarn, but almost sewing silk thin and a whole waistcoat is just out of the question. I am not that mad.

That I am more than a little mad is, however, without doubt, because I have just started on my second set of Eleonora do Toledo's stockings.

If you're not familiar with them, they're from Eleonora' di Toledo's grave and s such from before 1562. They were made from (originally) crimson silk in a pattern made up with alternating knit and purl. 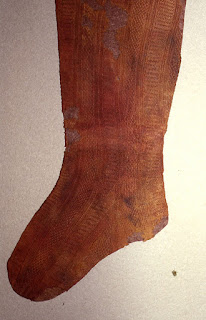 I am not making the pattern myself, but am using a reconstructed pattern made by Anne Des Moines, which can be found for free here.

This is the result. They're knitted on 2mm/US #0 needles from DROPS silk/alpaca. 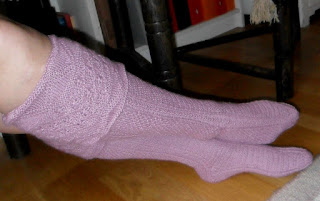 I'm rather fond of knitting stockings and it actually went quite fast. The pattern was good and easy to follow. It has a ribbed section added, to make them stay up, but I skipped that and keep them up with garters like they would have been in period.

The problem was to find good silk yarn, but last week I found and ordered silk from a woman who actually lives in the same town as I do. She is closing down her shop and has fewer clours than she used to, so instead of crimson I ended up with burgundy. The yarn is about the same thickness as buttonhole silk, but with a looser twist.
I made a swatch on the train up to a conference this Friday and settled for 1,5 mm /US #000 needles. So yesterday I started and this is how far I've gotten. They will take a lot of Harry Potter audio books to finish. 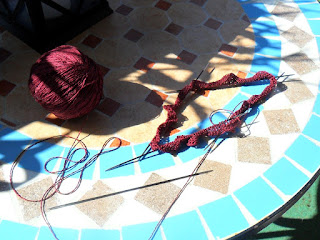