Shiny 13th century outfits for me and Måns

So, as is probably clear by now, I "play" in the Society for Creative Anachronism. And in a moment of madness/enthusiasm my friend Måns and I decided to enter the baronial polling of Gotvik, where we live. And we ended up being both chosen and accepted by the King and Queen, which meant that much sewing took place. 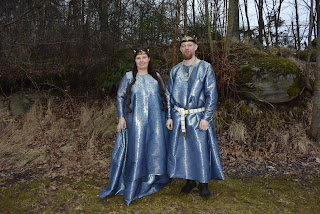 The fabric is silk brocade with metal threads, from Pure silks and the cottes are fully lined with white silk habotai which I bought at Classic Textiles in London. While the pattern of the fabric isn't specifically 13th century, I felt that it was not screaming "wrong century" either. 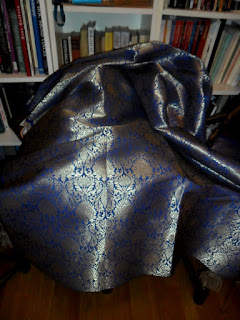 As I have written about in a blog post, there are many more examples of patterned clothing and fabric from the 13th and early 14th century than we usually think, so I naturally wanted patterned silk for this project.

My cotte is made from the pattern of the preserved tunic of St. Elisabeth of Thuringia. Måns' cotte is a slightly modified version of the same pattern. Since I didn't ant to break up the pattern of the fabric I decided to not put gores in the front and back as on the preserved 13th century tunic from Herjolfsnes (formerly known as the Rönbjerg tunic). There are too few finds from the period to be sure that this was a gendered way of cutting - after all: St. Francis of Assisi's cowl was cut with out gores in the front and back. My gown is very long, so to make a puddle of fabric on the floor, as seen in period artwork.

My hands are small enough to get through narrow sleeve openings without buttons or other fastenings, but on Mån's cotte we used these pewter buttons. They're replicas of medieval buttons that we got from Silverstielk Emporium. 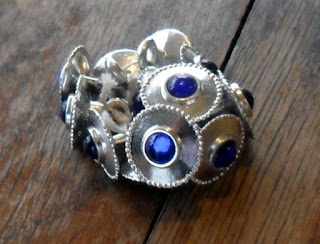 It may be clear to everyone now that the heraldic colours of Gotvik is blue and white (and ermine).

Anyway, since this is a blog about my costuming (and I don't have any photos of Måns on his own) I will end this with some more shots of me and my cotte (and my fake hair). 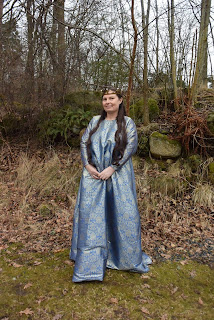 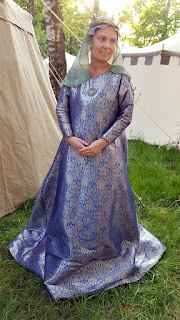 I lost a lot of weight and had to take it in over the bust. The green veil is inspired by all my research on coloured and decorated veils in the period (here and here)