Here you see two examples of gowns made from a thin wool fabric that I have printed. 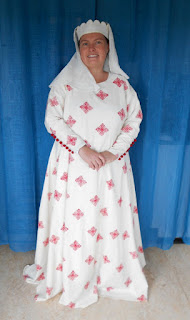 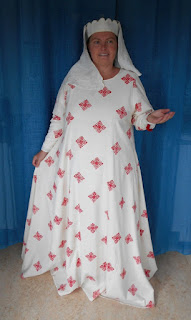 The cut of my gown is based on the early 13th century gown worn by St. Elisabeth of Thuringia, while I used a composition of the 13th parti-coloured Söderköping tunic and a variation of a sleeve from 14th century Herjolfsnes for my husband’s gown. His gown is slit in the front and back, something you often see in period art and which it is possible that the Söderköping tunic also was. The fabrics used are a thin white wool tabby and a red wool twill. The buttons on my gown are made from wool flannel, while Budde’s tunics has brass buttons. 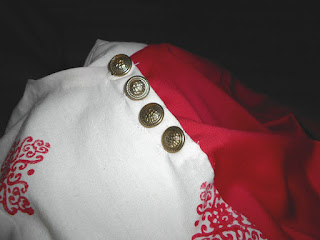 Fabric printing in Medieval Europe - Sources
Unfortunately, there are no medieval printed instructions on how to print fabric before the late 14th century or the 15th century. Cennino Cennini's Il libro dell'Arte.  from ca 1400 mentions printing on silk and linen and also mentions that printed linen is good to use for children’s clothing – presumably because it’s cheaper than the woven versions. I have myself only studied Cennini in English and Swedish translations and the differences between them makes me slightly wary about translations of source texts (well, I already was). There are contradictions between them. However, the English translation is based on the Italian original while the Swedish is based on a French translation, so I choose to rely on the English translation when they differ.
There is also a 15th century German treatise on fabric printing (among other things) which belong to the St. Catherine convent in Nürnberg. The manuscript specifically mentions that printed fabric could be used for liturgical clothing (which is natural given the context) It has been published an analysed by Robert Forrer in Die Kunst des Zeugdrucks vom Mittelalter bis zur Empirezeit, in 1898. It can be downloaded from here.
A Swedish manuscript, written by the Bridgetine monk, priest and scientist Peder Månsson (Swedish link only) in the 15th century also had a section dedicated to textile printing. Unfortunately, only the part about making flocked wall hangings/paper has been preserved. It differs from Cennini, but the inspiration is probably drawn from Italy, where he travelled.

Patterns and colours
The Swedish scholar Ingegerd Henschen shows that there was a strong connection between patterns on woven fabric and on prints. Sometimes the patterns are so alike that a specific pattern can be identified as taken from or being based on the same source as a woven fabric, in other cases strong similarities are found, though the print often is simplified.

Most of the preserved medieval prints are either printed with black or with gold or silver. Other colours used, and mentioned in Cennini, are red, green and yellow. The anonymous German writer describes how to print using silver, gold, wool shearings (to create a velvet like appearance) and paint. The colours mentioned are red, black, green, blue and white. According to Henschen many fabric prints before the 15th century were made with dark colours on a dyed background, red, blue or green. White could presumably also be used on dyed fabric, but it appears that he most common was a darker print on coloured fabric. Light backgrounds, mostly undyed, became more common in the 15th century. This photo shows a 15th century printed textile used as lining in a Swedish chasuble. As you see it has pritns in both black and white on an unbleached linen fabric. 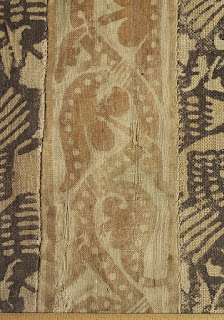 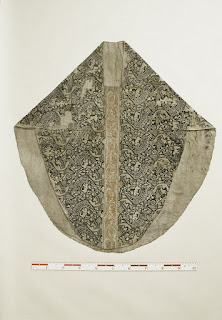 Copyright by Statens Historiska Museum, Jan-Eve Olsson.
Follow this link for some more amazing photos of the printed fabric.

What did they print on?
The most common material for textile printing in Europe was linen. There are late medieval examples on cotton or linen/cotton mixes. Since the latter were produced in large amount in Italy from the 13th century and in Southern Germany from the 14th century, this is not surprising. Especially since cotton fabrics mostly were directed at the cheaper end of the market. Most of this fabric was either bleached or dyed in one colour. When patterned cotton fabric made in Europe was usually in the form of woven patterns. Silk was also used for printing. It is mentioned in Cennini and there many preserved examples from medieval Europe. The German manuscript mentions printing on linen, velvet and also on wool.

My printed fabric
This is where we, to paraphrase Dumbledore, enter the realm of guesswork. Or speculation, or creativity. Mostly the latter I think. While both the German writer and Cennini mention printing on wool they are later than the period I am portraying. In Cennini, wool printing is mentioned mainly for tourneys and spectacles and the fabric is described as fulled, which means my wool is way too thin, and not fulled. The German writer makes no such distinction, but writes about wool which has lost colour and mine never had any to begin with :)

The stamp that I used is not based on a period example, but is a ready-made stamp that I found at a hobby store. The pattern Is reasonably medieval, or doesn’t look too off at least. The overall design of the fabric with the squares placed evenly was inspired by several manuscript showing what is most likely woven fabric. Such as this one, showing Cain killing Abel, while both are wearing very stylish tunics: 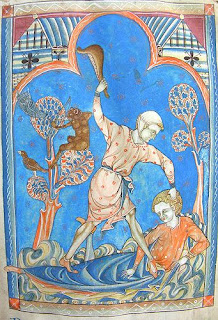 I chose red on white, as in Cains tunic, both because red was a colour used in period printing of fabric, and I had white woool, but I also think that red on white looks so lovely on these late 13th-early 14th century sculptures from the the Freiburger Münster: 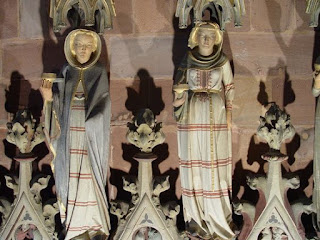 The paint that I used is a standard commercial fabric paint, the kind you set with a hot iron on the back of the fabric. To space the pattern evenly (or at least reasonably so) I cut a square piece of cardboard which I used as guidance for where to place the stamp.
It was boring, so it was very good to have my neighbour and friend Anna's company. 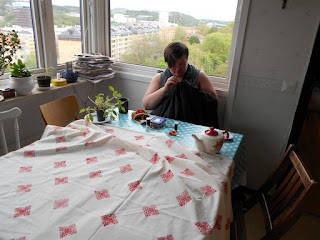 It was, by the way, even more boring to set each motif with the iron. I cut out all the piece before setting them so that I could avoid setting something that I wouldn't use. And to break the task down to more manageable pieces.

---------------
When I started this project I made a blog post about textile printing where you can see some more examples. It's here.