Somehow all the shifts that I made ten years ago have been worn out. I have one new from 2014, but the other ones really need replacing.

So before I went to Crown I cut out a shift and then I sewed on the way there, at the event (a little, during the tournament) and the way home. And this afternoon I finished it.

I've had the linen for eight years or so. I like self patterned linen and I thought that the stripes gave it a 13th century Spanish feel. After all they had a lot of striped clothing, even if I haven't seen a striped shift yet.

Keeping with the Spanisk influences I used Dona Teresa Gil's shift as my pattern. 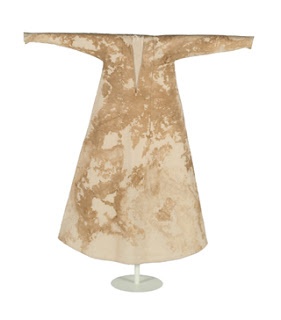 Photo from the history blog Nonnullus

I see that iI shoudl ahve made the slit at the neck much deeper, but I'm not sure if I'll change that. After all, I am not nursing anymore, and haven't done so for nine years, so I need it.
Upplagd av Eva kl. 11:04