Gifts for the King and Queen of Æthelmarc

Last weekend the new king and Queen of Æthelmarc. Marcus and Margarite were crowned and the baron of Gotvik and I sent gifts to them. Why, you may ask, sicnce there are no particlular reasons why a Swedish SCA barony should send gifts to an American SCA Kingdom. However, this wasa special case, since Marcus originally is Swedish. Furthermore, Lord Ho-Chi from Gotvik is Sir Marcus' squire and had decided to fly over as a surprise for him. Since he was there could just as well send greetings from us, and some gifts. So I made these: 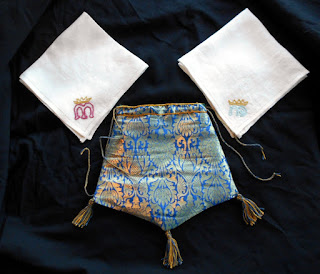 The purse is made from the same silk as mine and Måns' gowns for our investiture. It is lined with green silk and the embroidery, tassels and drawstrings are made from yellow and blue silk yarn. The blue is probably a modern dye, but the yellow has been dyed with onion peels by me and my friend Ragnhild. The draw strings are finger lucet.

In the bag was two linen napkins with drawn thread edging and embroidery in silk. The yellow is from the same dye bath with onion peels and the pink is cichineal, also dyed by me and Ragnhild, while the blue was dyed by baroness Felicitas Schwarzenbergin (founding baroness of Gotvik).

Gifts are an important part of SCA culture, but I want the gifts that I give to be both useful and period appropriate, which unfortunately isn't always the case. Lightweight is also an issue when you're flying, so these fit perfectly. The bag is c 22 cm at its widest point and could work for both 13th, 14th and 15th century.

I also wrote a letter on parchment, with a wax seal, but forgot to take photos of that. However, Ho-Chi took some, so I can get a photo when he comes back to Sweden.
Upplagd av Eva kl. 09:09