Yesterday I was at the Gothenburg Historical Museum's storehouse to look at some 17th century textile artifacts. I am currently working on a project together with the museum, where I put some of their objects into a larger context; using contemporay art and written sources.

I of course knew that these existed, but it is really cool to see them up close.

This is a silk knit waistcoat from the 17th century. 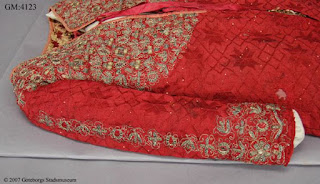 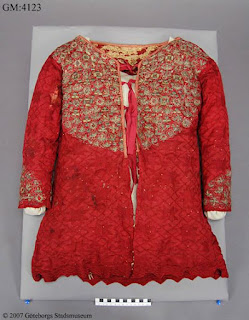 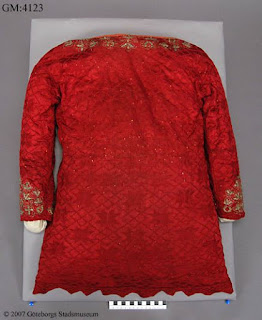 All photos of the knitted waistcoat by Klas Blomgren. Rights to the photos belong to Göteborgs Stadsmuseum, but they can be used for non-commercial use. See the catalog web page for terms and for more photos.

This type of waistcoat is called "damask-knitted waistcoats" and there are 14 known exmaples from the 17th century: One in England, one in Scotland, 11 in Norway and one in Sweden; this one. Maj Ringgard has recently written an article on them:  “Silk Knitted Waistcoats - a 17th-century fashion item” in Mathiassen, Tove Engelhardt, Nosch, Marie-louise, Ringgaard, Maj, Toftegaard, Kirsten & Venborg Pedersen, Mikkel (ed.), Fashionable encounters: perspectives and trends in textile and dress in the early modern Nordic world, Oxbow Books, Oxford, 2014
While the brocade knitted type of waistcoat appear to be Italian in origin, Ringgard argues that this type was, if not made in the Nordic countries, at least made for this market. At least we know that they were imported - Swedish customs lists from 1685 show that 436 knitted silk waistcoats and 84 wool knitted waistcoats were imported in that year (Hazelius-Berg, Gunnel, “Stickad tröja” i Fataburen: Nordiska museets och Skansens årsbok. 1941, Nordiska museet, Stockholm, 1941), and they are also found in shop inventories from the period.

They were made with a silk pile on the inside to provide extra warmth. 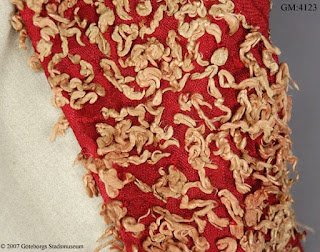 The yarn used is somewhere between sewing silk and buttonhole silk in thickness.

I also got to look at some less luxurious garments, equally interesting.

This is the front panel of a wool jacket with a striped wool lining, which was found in 17th century layers during excavations in Gothenburg. The original colours are impossible to make out, but at least you can see the stripes. Here's that garment's catalog page. The photos are taken by Anna Adrian and the rights belong to Göteborgs Stadsmuseum. 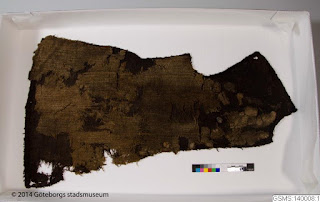 I saw other cool stuff too of course, like these remnants of a 16th century leather jerkin which were found during excavations in the 1910s, and the remnants of a pair of 17th century shoes and gloves.