Double Wars has already started, but due to my work we can't go until Wednesday afternoon. I wasn't going to make anything new (I've made enough new garments already), but then I remembered how could the evenings can get this early in May.
So I decided to kill two birds with one stone: I am teaching a class about knitted garments in the renaissance and it's always good to have examples for people to see and touch.

2014 I made a pair of mittens for Maja based on a find from the 16th century, now in the Museum of London: 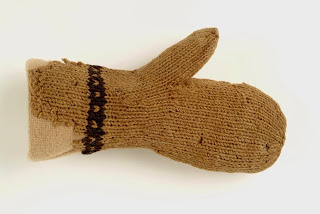 It is part of a set of clothing for a small child, much smaller than Maja of course. 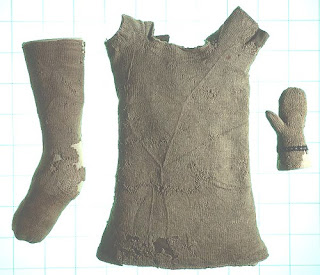 These are the ones I made in 2014, from alpaca yarn that I had got from my friend Anna. It was part of the Historical Sew Fortnightly. Alpaca yarn of course isn't period, but like many kids Maja is extremely sensitive about teh scratchiness of wool (personally I love the feel of wool to the skin) and in combination with the fact that the yarn was free and I would use up a remnant that otherwise would just lie there in her stash made it an easy choice. 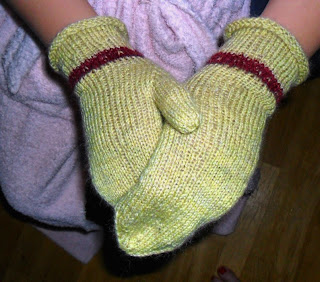 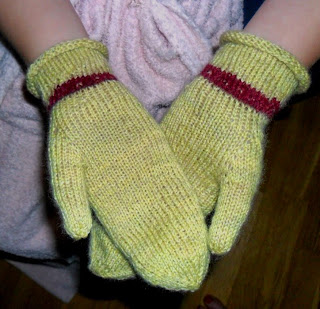 Maja used them a lot, which probably is the reason why they are now lost. They would also have been too small for her now, even if we had known where they are.

So yesterday I started on a new pair, also yellow, and also made from yarn that I had got from Anna. And, again not period: it's a mix of cashmere and merino. Very soft and perfect for kids. 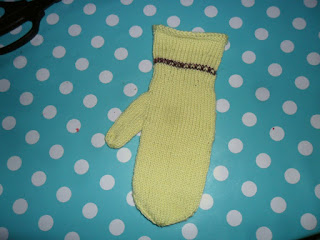 It's a good thing that mittens are so quick to make, even if you have to unravel a couple of centimetres as I had to. I count on the other one being finished by the time we leave for Double Wars on Wednesday, even if I have lots of work to do.

The pattern is improvised as I knit, but I am thinking about actually writing it down.