Ever since going to Florence last autumn I've been inspired to make som more Italian costumes. The first result was this 15th century gown. My next plan was to make 16th century Florentine, including a version of the Pisa gown (scroll down) - after all I have 25 metres of red velvet :)
But then the baroness-thing happened and Måns and I decided to go for the period ca 1250-1330.

Another trip to Florence together with my firend Sara this spring and then Bologna this September didn't make me less enthusiastic over medeival and Renaissance Italy, but while Florence made me want to make stuff from the 15th cend 16th centuries, Bologna, especially the Pinacoteca, made me appreciate, and love, the subtle differences between Italian 14th century fashions and those north of the Alps. It's been visible in this blog ever since I came home from Bologna and now I have also finished my first gown in Italian early 14th century style.

I have been very ill with my arthirtis and still can't spend much time sitting in front of the computer, so the documentation will have to wait, but I do have some photos, taken by my friend and neighbour Anna. 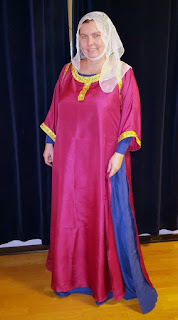 From this partly improvised photo session ( I didn't have a shift under, nor stockings - oh no!) I learned a few things:

1. I got the hair right, but I need more practicing with my various sheer silk veils and wraps.

2. I should not wear a bra under. I knew this of course, but I forgot to bring something else to keep the boobs in place when I went over to her place.

3. The glass beads on the trim makes it heavy and I need to pin the overtunic to the undertunic, so it won't fall down. Probably best to pin it to the shift too.
Illustrated by this photo.

By request: close-up of the tri, glass beads sewn to gold coloured trim.