To those of you who know me it comes as no surprise that I had to give the extremly short-waisted Italian gowns that I discussed by the end of this post a try.

The gown is hand sewn from a very thin teal silk, and lined with a printed cotton. Cotton was both imported, usually very fine cottons with printed patterns, to Italy from India or the Islamic world, and woven in Italy in the 13th and 14th centuries. The fabric made locally was usually either in a solid colour or with woven patterns and usually heavier. Mostly they were half-cottons, with linen warp (fustian). My lining fabric, which can be seen further down the post, is of the type that would have been imported from India, and while not a perfect copy of period printed fabrics the scroll-like pattern at least resembles medieval Indian cottons. Fur, or another silk would have been a more easily documentable choice, but I'm using stuff I already had. And it does make for a both warm and still extremly lightweight gown. 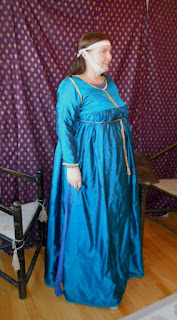 The tie which doesn't align with the bust seam I got from these women: 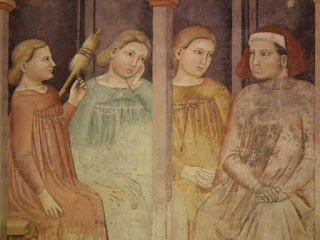 Though, since I have much larger boobs, it looks a bit different. Most like the girl in red I think. I wasn't wearing a bra under it, just a shift with a belt under the bust and I think it would require something really tight flattening the boobs to look right, almost like breast binding.
It is obvious from this painting that neither the bodice seam, nor the tie should go under the breasts, but across them.

Or you can wear it without the tie, like on this image, which was my main inspiration: 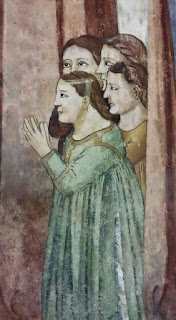 Like that gown my gown is slit all the way up to the seam of the bodice. You can see the lining in the photo below. 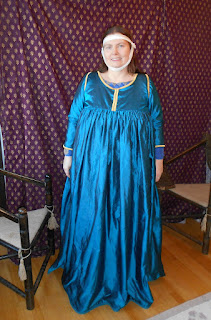 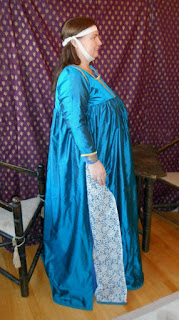 The tunic worn under the gown also is my old blue silk tunic. A tunic from another fabric is much less common than both the tunic and the over gown being from the same fabric. But I didn't have more of the teal silk.

The seam above or across teh bust really seems weird and contra-intuitive to us, but it is not unknown in the history of costume. One of the oldest Swedish folk costumes, Vingåkersdräkten, is made in this way: 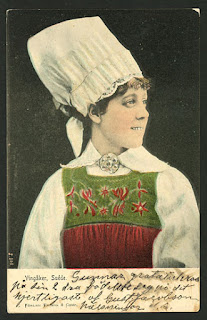 It is of course not documented before the 18th century, and has no conenction to Italy. But that it existed made me more confident about cutting my gown at least.

Incidentally his folk costume is also often described as "medieval in style" in older books about folk costumes. To  this I usually respond - bah! There are no medieval gowns either depicted or preserved from Northern Europe with this construction. But maybe the Swedish scholars writing 70 years ago or so had seen images of these Italian gothic frescoes, and not knowing much about medieval dress at all, thought that this was a typical medieval dress for all of Europe. With their ideological bias which prescribed  ancient roots to the clothes of the peasants, they were ready to track almost anything to the Middle Ages given half a chance anyway.