Some images of men's clothing in the Quattrocento

This is for my friend Jan-Erik, who needs inspiration for new 15th century outfits.

First of all: Anéa has a good overview of preserved male garments from the Italian renaissance: see it here.

The there are so many images of men in paintings from 15th century Italy that I can only give a few  examples. As inspiration, not as a comprehensive guide.

This is from Palazzo Davanzati, which is a really cool place which you should visit if you go to Florence. ca 1450. Note that their hose are not yet joined.The doublets, which were called farsetto, are of roughly of the same popular type which can be seen in the rest of Europe; with puff sleeves reaching to the elbow and a narrow waist. 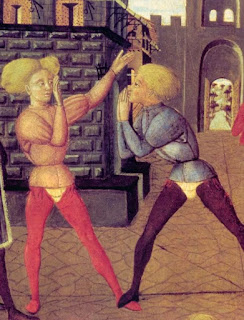 This is another, lovely, view of the back of a farsetto. You can see the way the collar is cut and the way the hose (still separate) are pointed to the farsetto. Piero della Francesca The battle between Heraclius and Chosroes, 1452-1466. 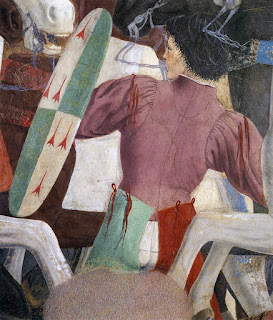 There's at least one preserved farsetto, which used to belong to Pandolfo III Malatesta, who lived between 1369-1427. 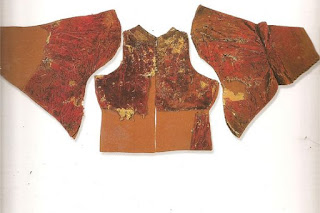 This photo doesn't show the back pieces, so I present you also with my extremely professional sketch of the pattern pieces from a presentation by Elisa Tosi Brandi at the first Dressing the Early Modern conference in Florence in 2015. The back is to the left and despite the drawing it was bigger than the front. 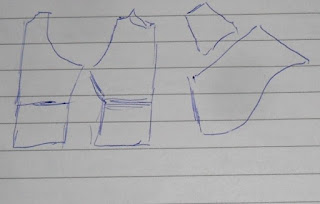 Another one by Piero della Francesca. The torturing of the jew. Yes, really :(
This shows some interesting variations of layering:
The guy to the left has a brown doublet with a high collar in the back adn sleeves which are either tied to the doublet or just attached at the front, since we can see the shirt in the armscye. The sleeves are split and tied with ribbons at intervals. Over it he wears a light blue jacket with a deep v-neck in the back, a wide, gored skirt and long sleeves, with a pronounced puff at the top. In addition to being pleated they appear to have some kind of stiffening or padding to make them round. These sleeves are only attached at the shoulders, making it possible to take them off and let them hang. 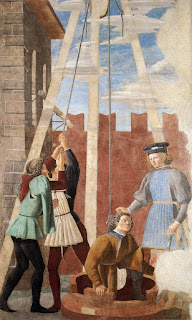 The guy in the middle left  has a dark blue doublet and over it a pleated tabard-like garment, a giornea. The guy in the far right also wear a pleated giornea, light blue in this case, over a doublet with puffed sleeves.
There is actually one of these preserved too, showing padded pleats held in place by sewing them to a ribbon or fabric. 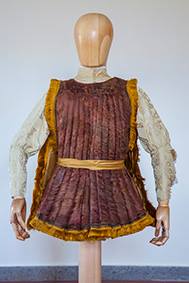 The jew being tortured, finally, has a blue doublet with a high neck under a wide-necked brown jacket with long skirts.

The Allegory of April, Triumph of Venus by Francesco della Cossa, c. 1480 also show a pleated gironea, as well as a jacket with longer skirts. 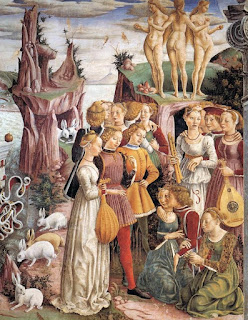 Lovely mi-parti hose. And the interesting variation of the gironea where only the front is belted and the back hangs lose. 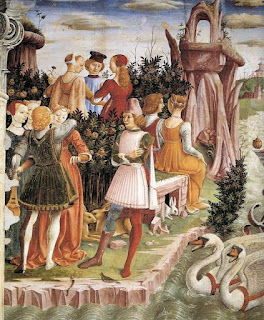 More farsettos and giorneas: Filippo Maria Sforza Count of Corsica and Pavia,son of Galeazzo and Bianca Maria,(second from left,with his siblings Galeazzo Maria, Ippolita Maria and Sforza Maria from left to right),c.1465-70 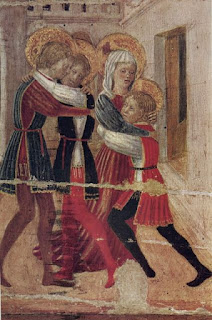 Portrait of Andre Jacquemart by Giorgio Schavone,c. 1460. Again high necked doublet, farsetto, worn under a giornea, which also has a stand-up collar, but lower. Nice hat. 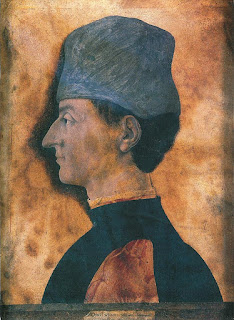 Short clothing was, of course, mostly worn by the young. Andre Jacquemart above probably wore his giornea knee-long or longer. Long clothes were seen as fitting and honourable for us middle aged people. Melozzo da Forli. Foundation of the Library, 1477 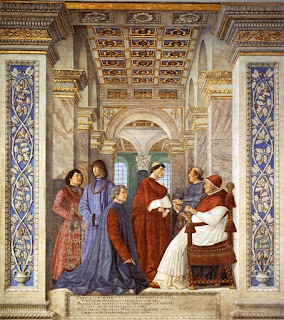 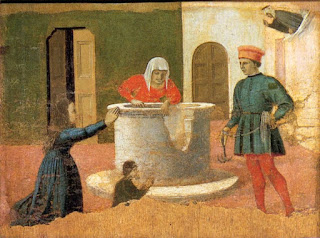 Though a jacket ending at the mid-thigh is still pretty short.

Mid-lenght, but in no way mediocre - or middle-of-the-road. So Much Pleating! The hospital of Santa Maria della Scala in Siena, 1440-44. Fur lined it appears. The pleats are probably held in place by (linen) stay tapes on the inside. Extravagant hose, to say the least. 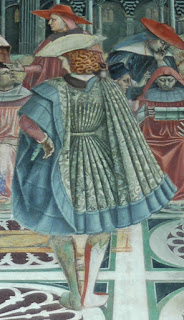 One peculiar, and probably rather uncomfortable, trait in late 15th century Italian men's (and occasionally women's) dress is that the neck is very high in the front, dipping low in the back. As iullustrated here by Giovanni II Bentivoglio, painte by Ercole de Roberti c. 1490. 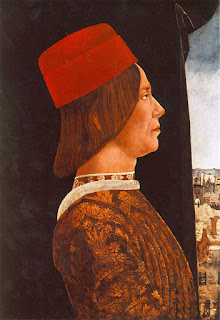 Nice back view of a pleated jacket with a rather low neck, over a high-necked light blue farsetto. Piero della Franscesca again. 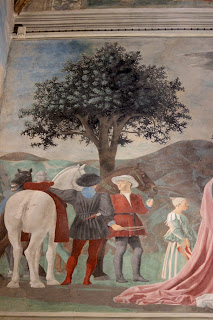 Digging in your underwear: Piero della Francesca, Finding and recognition of the True Cross.

Looser jackets with a turn down collar, reaching to mid-thigh is seen on many "ordinary" men. Here we return to the battle between Heraclius and Chosroes. 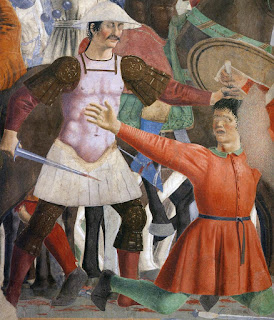 As a last picture I give you this lovely outfit painted by Luca Signorelli, either at the very end of the 15th or the beginning of the 16th century. So many places to see the white linen shirt; and look at those boots! 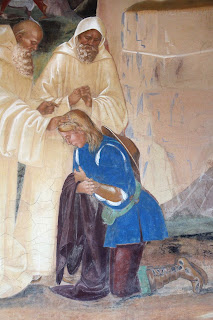 Anyway, this was just some inspiration, there are also some valuable articles and web sites about Italian men's dress in the 15th century, aside from Anéas site, which I've already linked to. Here are two:

An Overview of Men’s Clothing in Northern Italyc. 1420 - 1480as reconstructed by Master Lorenzo Petrucci